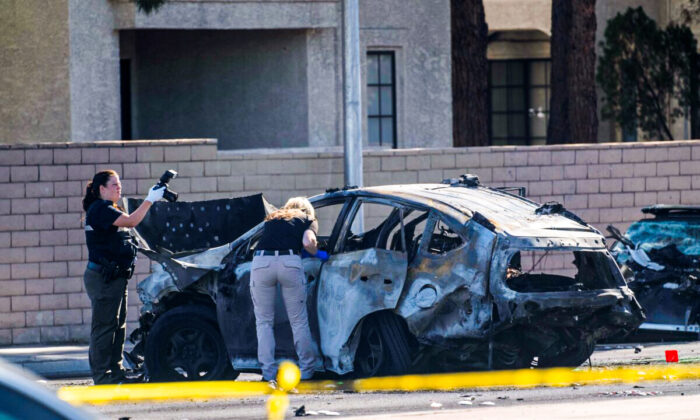 Las Vegas Metro Police investigators work at the scene of a fatal crash in Las Vegas, on Nov. 2, 2021. (Eric Jamison/AP Photo)
US News

U.S. road deaths increased sharply during the COVID-19 pandemic, though fewer drivers were on the nation’s highways, because of “riskier than average” behavior, according to new research by the AAA Foundation for Traffic Safety.

“As the COVID-19 pandemic swept across the country, it led to fewer drivers on the roads and a significant reduction in the number of miles driven.

“And yet, U.S. government data shows traffic fatalities have surged, along with an increase in crashes involving impairment, speeding, red-light running, aggressiveness, and non-seatbelt use, to its highest level in over a decade,” the foundation said in a statement.

The survey found that while most drivers had reduced their driving during the pandemic, “a small proportion” actually increased miles behind the wheel.

“Making matters worse, those who increased their driving appeared to be riskier than average, even after accounting for their age, gender, and how much they drove,” according to the foundation’s American Driving Survey, which was released on Feb. 28.

“Our research finds that higher-risk motorists accounted for a greater share of drivers during the pandemic than before it,” said Dr. David Yang, the foundation’s executive director. “Safety-minded individuals drove less, while many who increased their driving tended to engage in riskier behaviors behind the wheel.”

The survey found that only 4 percent of respondents were driving more during the pandemic, and these were “younger and disproportionately male—a statistically riskier driver group than the average population.”

Moreover, those who increased their driving miles were more likely to speed 10 mph over the posted limit (51 percent), read a text while driving (50 percent), change lanes aggressively (43 percent), drive without a seatbelt (21 percent), or operate under the influence of alcohol or cannabis (13 percent).

“In addition, a small segment of the population—approximately 4 percent of drivers—reported that the pandemic led them to increase the amount that they drove. These drivers were predominantly younger than those who reduced their driving and those who did not change how much they drove during the pandemic, and a greater proportion of them was male.

“This suggests, even if only on the basis of demographic patterns, that those who increased their driving were likely higher-risk drivers.”

These drivers were also more likely to engage in risky behavior such as distracted driving, or driving while fatigued, the survey found.

“While the mechanisms responsible for the observed associations are unclear, other research suggests some possibilities,” it stated.

“It is possible that many of the individuals who were willing to travel—and even increased their travel—despite the health risks associated with the pandemic were already more willing than average to take other risks.

“There is some limited evidence that such factors might be at play.”

The survey drew upon the latest data from the U.S. Department of Transportation’s National Highway Traffic Safety Administration (NHTSA), which reported that 38,680 people died in vehicle crashes in 2020—the largest number of road deaths since 2007.

“This is a national crisis. We cannot and must not accept these deaths as an inevitable part of everyday life,” Transportation Secretary Pete Buttigieg said in a statement.

“The good news is we now have a strategy, as well as the resources and programs to deliver it, thanks to the president’s Bipartisan Infrastructure Law.

“The National Roadway Safety Strategy is America’s first-ever national, comprehensive plan to significantly reduce deaths and injuries on our roads.”

Steven Cliff, deputy administrator of NHTSA, said: “We have to change a culture that accepts as inevitable the loss of tens of thousands of people in traffic crashes. This will require a transformational and collaborative approach to safety on our nation’s roads.”

“Despite safer roads, safer vehicles, and stronger traffic safety laws on the books, the United States has witnessed more, not less, death on our roadways even at a time when other nations saw dramatic drops,” said Jake Nelson, AAA’s director of traffic safety advocacy and research.

“What is absolutely clear to AAA is that it will take new action to get us closer to zero traffic deaths.”