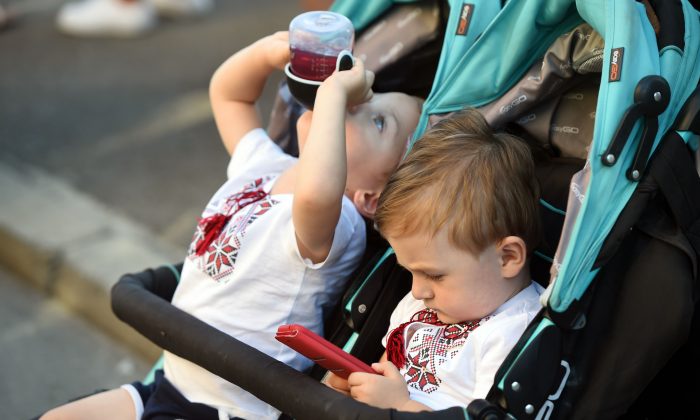 A baby plays with a mobile phone while his twin brother drinks juice in Kyiv, Ukraine, on Aug. 11, 2018. (Sergei Supinsky/AFP/Getty Images)
Tech News

Preschoolers who spend more than two hours per day on smartphones and tablets are seven times more likely to develop the symptoms of ADHD, according to new research.

The study of nearly 3,500 Canadian children aged 3-5 found that those who had over two hours of screen time per day were also five times more likely to display inattention, acting out, and hyperactivity compared with those who spent less than 30 minutes on a screen per day.

“The two big takeaways from this study are that children exposed to more screen time, at either age 3 or 5 years, showed significantly greater behavioral and attention problems at age 5 and that this association was greater than any other risk factor we assessed, including sleep, parenting stress, and socioeconomic factors,” said the study’s lead author Sukhpreet Tamana, a post-doctoral fellow at the University of Alberta in a statement.

The study, published in the PLOS One journal,  used data from the CHILD Cohort Study, a national survey collecting a wide range of health, lifestyle, genetic, and environmental exposure information.

The average 3-year-old was found to be spending 90 minutes a day looking at screens, according to the study.

One in seven spent over two hours watching and swiping at screens. They had a 7.7-fold increased risk of meeting criteria for attention deficit/hyperactivity disorder (ADHD), according to the study.

Current Canadian guidelines suggest a maximum of one hour screen time for children. The study authors believe that should be lower, based on their results.

“Our data suggest that between zero and 30 minutes a day is the optimal amount of screen time,” said Piush Mandhane, lead study author, according to a statement. “The preschool period is an ideal time for education on healthy relationships with screens, and we believe our data show that you can’t start too early.”

The researchers also looked for things that appeared to reduce the negative effects of screen time on their behavior. While good sleep had little impact, participation in organized sports was the most outstanding factor.

“Interestingly, it wasn’t physical activity on its own that was protective; the activity needed to have structure,” said Mandhane. “And the more time children spent doing organized sports, the less likely they were to exhibit behavioral problems.”

“A lot of the things that you do through organized activities are really important for young kids early on,” said Tamana. “It sets the stage for development among children. I think in lieu of screen time, it would be beneficial for parents to increase opportunities for other structured activities instead.”

The data was somewhat imperfect because it was self-reported by parents, that is, they noted down the total times their children spent each day on various activities.

The study also only establishes a statistical link between behavior and screen time—not direct causation.

“Little is known about how the type of media consumed is linked to mental health outcomes, and whether screen content itself is detrimental or is a marker for less activity or social interaction,” said the conclusion of the research paper.

In other words, it is not clear if the devices themselves are causing behavior problems, or if they take time from social interaction, which itself causes problems.

“Increased use of video and text chat, social media platforms, and social apps may have differential effects on mental health outcomes in children,” said the paper.

“Our findings indicate that preschool may be a critical period for supporting parents and families on education about limiting screen-time and supporting physical activity,” it added.