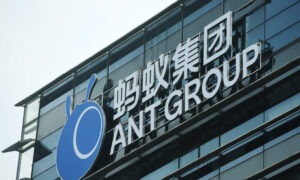 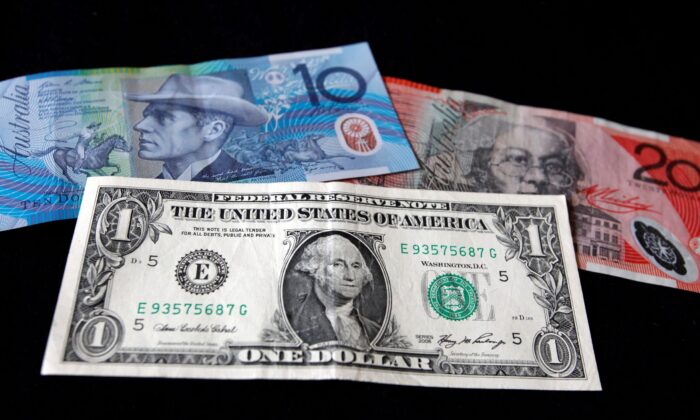 A U.S. dollar note (bottom) is pictured alongside an Australian 10 dollar (L) and 20 dollar bill in this picture illustration taken in Washington on Oct. 14, 2010. (Jason Reed/Reuters)
Business & Economy

The euro traded little changed at $1.17205, largely ignoring developments in German elections at the weekend, with the Social Democrats projected to narrowly defeat the CDU/CSU conservative bloc.

The dollar index, which measures the U.S. currency against six major rivals, hovered in the middle of its range of the past week, trading slightly higher at 93.40.

“It seems to be pretty much a continuation of last week, high-betas performing well, havens lagging behind the pack, with the FX market really just following the improvement in sentiment that we have seen more broadly—stocks snapping a two-week losing run, and yields rising quite sharply,” said Michael Brown, senior market analyst at Caxton FX.

U.S. yields climbed to their highest since the start of July in anticipation of tighter U.S. monetary policy after the Federal Reserve announced last week that it may start tapering stimulus as soon as November and flagged interest rate increases may follow sooner than expected.

“USD is likely to remain caught in the cross-currents of a more hawkish FOMC and fading concerns around a potential Evergrande default,” Commonwealth Bank of Australia analysts wrote in a client note.

“Nevertheless, the risks are skewed to a firmer USD,” with any renewed Evergrande worries unlikely to trigger the level of market volatility of last week, they said.

Concerns that China’s second-largest developer Evergrande could default on its $305 billion of debt has overshadowed trade in recent weeks, but some of those contagion fears are receding.

That followed moves in benchmark 10-year U.S. Treasury yields, which touched 1.4660 percent for a second day on Monday, the highest since July 2, before easing back to 1.4527 percent.

“The correlation between U.S. bonds yields and USDJPY has picked up,” Chris Weston, head of research at brokerage Pepperstone in Melbourne, wrote in a client note.

“USDJPY looks a little stretched, so I’d be wary to chase here, but I would be looking for a re-test of 110.50 as a potential support zone within what is a progressively bullish trend.”

The Norwegian crown gained about 0.4 percent and touched 8.5493 per dollar for the first time since July 6.

The Canadian dollar added about 0.3 percent to C$1.2622 per greenback.

Those gains come as Brent crude advanced for a fifth day, closing in on $80 a barrel, while iron ore, copper and other industrial metals rose.

Central bank speakers will be in focus this week, with Fed Chair Jerome Powell joining Treasury Secretary Janet Yellen in speaking to Congress on Tuesday.

The European Central Bank hosts an annual forum on Tuesday and Wednesday, with not only ECB President Christine Lagarde speaking to open day one, but also joining a panel discussion on day two with Powell, Bank of Japan Governor Haruhiko Kuroda and Bank of England Governor Andrew Bailey.