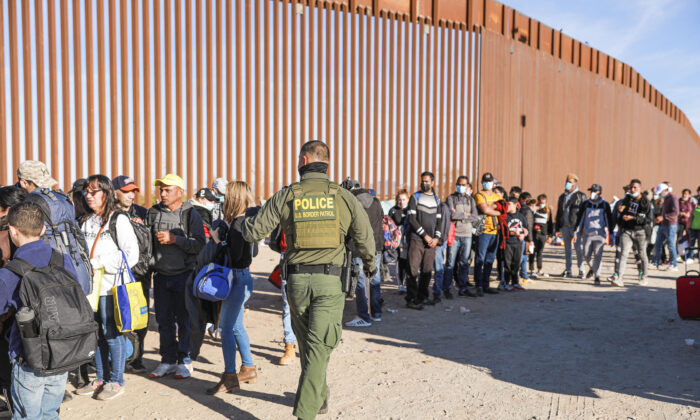 A Border Patrol agent organizes illegal immigrants who have gathered by the border fence after crossing from Mexico into the United States in Yuma, Ariz., on Dec. 10, 2021. (Charlotte Cuthbertson/The Epoch Times)
Immigration & Border Security

Tens of thousands of illegal immigrants are having their deportation cases dismissed before stepping inside an immigration courtroom because Department of Homeland Security (DHS) officials are failing to file the requisite paperwork, a new report has found.

One out of every six new cases (16.6 percent) is being dismissed due to the failure, according to the immigration court docket tracker Transactional Records Access Clearinghouse (TRAC) at Syracuse University.

For the six-year period from fiscal year 2013 through fiscal 2018, fewer than 1 percent of the cases, or 1,221, were dismissed due to DHS failure to submit the necessary “notice to appear” paperwork.

The number of dismissals due to the same failure has increased dramatically every year since, with 47,330 cases so far in fiscal 2022, with three months remaining to be tallied, according to the newly released data.

TRAC obtained the information through a series of Freedom of Information Act requests.

A notice to appear is typically given to an illegal border crosser while the person is still in Customs and Border Protection (CBP) custody. The notice includes the date of the illegal immigrant’s first court hearing.

After handing over that notice, CBP is required to make sure the court receives an electronic copy of the document, according to TRAC. If CBP fails to submit the paperwork, the court doesn’t have jurisdiction to hear the case and must dismiss it.

The failure to properly manage the process “suggests there is a serious disconnect between the CBP agents entering new cases and scheduling hearings through the Court’s ISS [Interactive Scheduling System] system, and other CBP personnel responsible for submitting a copy to the Court,” the report states.

CBP and its parent agency, DHS, didn’t respond to requests for comment.

The dismissals mean asylum seekers “now have no path to a work authorization card, possibly no path to asylum (unless they have an attorney who will file affirmatively), plus it’s just creating a mess for everyone,” Austin Kocher, a researcher at TRAC, wrote on Twitter.

Aaron Reichlin-Melnick, policy director at the American Immigration Council, said immigrants whose cases are dismissed are “effectively stuck in limbo, unclear how to proceed.”

While TRAC was unable to find where exactly the failure was occurring within CBP, it discovered that several immigration courts are responsible for the bulk of the dismissals.

The immigration court in Miami topped the list for dismissals at 81 percent of all new dedicated docket cases, or a total of 7,700 people. The city was also fourth on the list with a 43 percent dismissal rate for its regular hearing docket. Boston and Houston came in second and third, respectively.

Bryan Griffin, a spokesman for Florida Gov. Ron DeSantis, told The Epoch Times in an email that immigration proceedings are handled on the federal level. He said the issue was “another failure of the Biden administration to defend the sovereignty of our nation.”

The Biden administration created the dedicated docket program in May 2021 and set a goal of issuing decisions in these cases within 300 days from their initial hearing, according to an earlier TRAC report on dedicated dockets. The average wait time for asylum cases is nearly 4 1/2 years.

Immigration judges ruled 92 percent of asylum claims on the dedicated docket as meritless and ordered the defendants be removed from the United States, according to December 2021 data.

In 2021, as illegal border crossings reached record levels, Border Patrol agents began to issue a “notice to report” to illegal aliens, instead of the official notice to appear form.

The notice to report was essentially a request that the illegal alien report within 60 days to a local Immigration and Customs Enforcement (ICE) office once they got to their destination in the United States.

Nearly 95,000 notices to report were issued from January through October 2021, according to DHS. By January 2022, more than 47,000 illegal immigrants were yet to report to ICE, according to official data received by Sen. Ron Johnson (R-Wis.).

Matt O’Brien, an immigration judge dismissed by the Biden administration, said during his final two months on the bench that ICE dropped 99 percent of its deportation cases that were pending on his docket.

“The vast majority of the matters dismissed were legitimate cases that ICE spent taxpayer dollars investigating, filing, and prosecuting. There was absolutely no legitimate reason to withdraw the charges against any of these immigration law-breakers,” O’Brien, now the director of investigations for the Immigration Reform Law Institute, told The Epoch Times via email.

O’Brien suggested the dumping of cases is related to what he described as “the Biden administration’s radical commitment to destroying America’s borders and its immigration enforcement mechanisms,” as well as a cosmetic reduction in the immigration courts’ overloaded system.

“This kind of complete lawlessness shows a disregard for the safety of the American public that simply cannot be overstated,” he wrote.