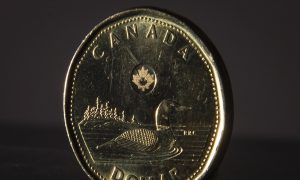 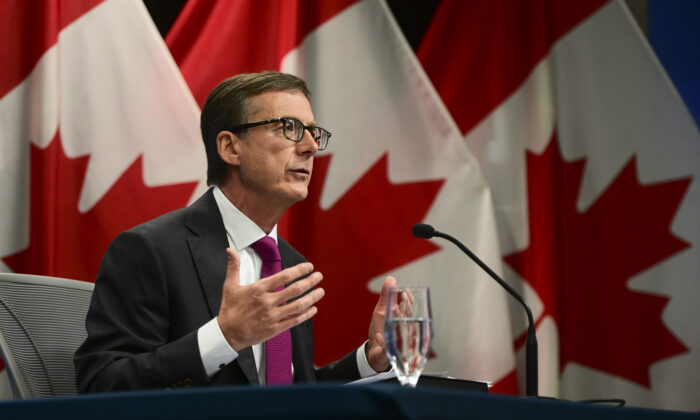 Governor of the Bank of Canada Tiff Macklem holds a press conference in Ottawa on Oct. 28, 2020. (The Canadian Press/Sean Kilpatrick)
Economies

Loonie’s strength partly due to a change in the White House, says foreign exchange strategist
By Rahul Vaidyanath
biggersmaller
Print

The Canadian dollar’s strength is acting as a headwind for the country’s economic recovery, but its rally isn’t happening in isolation, as broad U.S. dollar weakness has been a trend since last spring. Part of the reason for the greenback’s decline is its adjustment to a Joe Biden presidency and the prospect of higher taxes, Greg Anderson, BMO’s global head of foreign exchange strategy, told The Epoch Times.

Anderson points out that all G10 currencies have strengthened relative to the U.S. dollar and that the loonie is nothing special in this regard.

The United States used to have higher interest rates, and as a perceived safe haven in times of market turmoil, it would typically strengthen. But since U.S. interest rates have come down to near-zero levels like those of every other major country, exchange rates tend to head toward their long-term averages, Anderson said.

“The second part of the U.S. dollar’s extreme valuation was political,” he said, adding that when the Trump administration slashed corporate taxes, it made the United States a more competitive place for business.

“If you improve competitiveness then the currency can go up. And it did,” Anderson said.

And conversely, as the greenback started weakening, it was in part reflecting the market’s belief that Joe Biden would win the Nov. 3 election, raise taxes, and weaken the U.S. competitive advantage for business, Anderson explained.

Also, as the Trump administration targeted China’s unfair trade practices, including theft of intellectual property and other violations of international norms, the Canadian dollar came under pressure due to more uncertainty in global commerce. But now, that risk has faded and the loonie along with other major currencies have rallied back, said Anderson.

He added that the Canadian dollar’s long-run norm is about US$0.81—slightly higher than where it is currently trading, around US$0.785. But given all the more pressing concerns on the minds of consumers due to the pandemic, a slightly stronger loonie is not something to worry about, Anderson added.

It’s more of an issue for policy-makers.

Won’t Get Much Stronger

After the Bank of Canada said on Jan. 20 that it would not lower interest rates or increase bond buying, the loonie shot above US$0.79 and hit a three-year high. The loonie had fallen below US$0.69 late last March during the worst of the turmoil in financial markets with the first lockdown.

Anderson said the loonie’s ascent will slow down if it goes much higher, as it would start to move away from its long-run norm.

Bank of Canada governor Tiff Macklem said a rise in the Canadian dollar can act as a shock absorber in the Canadian economy if the rise is driven by Canadian factors. For example, if the economy heats up, inflation could rise uncomfortably, but a stronger loonie would act as a dampener against rising prices.

Years of Near-Zero Interest Rates the Latest Bid to Spur Recovery in US, Canada

But the current rise in the loonie is not expected to act as a shock absorber since it’s not mostly driven by Canadian factors.

And while it will make it cheaper for Canadians to buy goods and services priced in U.S. dollars, the rising loonie will make it more expensive for U.S. customers to buy from Canada.

“It will weigh on exports,” Macklem said during his Jan. 20 press conference after the release of the central bank’s monetary policy report. “For domestic producers, it means imports present more competition.”

The BoC does not target a certain level for the exchange rate with the United States. It is an input to their projections for the economy.

There’s little room for further rate cuts to try to push the loonie lower, said David Rosenberg, chief economist and strategist at Rosenberg Research and Associates, in an interview with BNN Bloomberg. But if the bank started buying more bonds, which would put more Canadian dollars into circulation, that would cool off the loonie, he added.

The cause for the loonie’s appreciation is what’s key, Rosenberg said.

“If commodity prices go up, the Canadian dollar is probably going to appreciate, and there’s nothing really wrong with that,” he said.

Another phenomenon in foreign exchange markets is that they are back to working well after a short period of adjustment to traders working from home.

And as in many other industries, FX markets have had a change in focus during the pandemic.

Anderson said typically foreign exchange trading activity would pick up around the release of economic data such as the monthly jobs number, but now trading is steadier throughout the day and is being increasingly driven by updates on the pandemic.

“I’m much more worried about the rollout of the vaccine,” Anderson said.