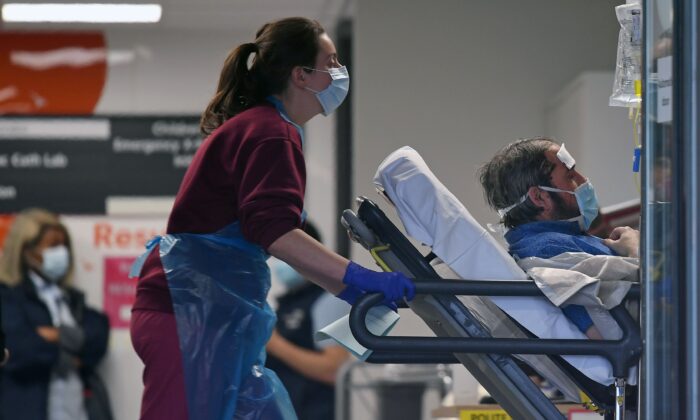 A medical professional in PPE pushes a patient, also wearing a mask, as he lays on a bed inside St. Thomas's Hospital in north London, on April 1, 2020. (Daniel Leal-Olivas/AFP via Getty Images)
UK

One of the world’s foremost cancer experts has said that British lockdown policies are still having an impact on excess mortality, describing it as a “national scandal.”

The Telegraph reported that 9,300 more people than usual died in the past four months from non-CCP (Chinese Communist Party) virus causes.

The latest figures from the Office for National Statistics show that England and Wales registered 20,823 more deaths than the five-year average in the past 18 weeks. Only 11,531 deaths involved the CCP virus.

The increase prompted experts such as Professor Carl Heneghan, director of the Centre for Evidence-Based Medicine at the University of Oxford, to call for an urgent investigation.

“We urgently need to understand what’s going wrong and an investigation of the root causes to determine those actions that can prevent further unnecessary deaths,” he told the publication.

The excess is likely to grow as more deaths are registered in the coming weeks.

Consultant Oncologist and Professor of Medicine at the University of Buckingham Medical School Professor Karol Sikora is a world-leading cancer expert.

“What seems to be happening is that there is a higher death rate from the backlog and lack of access to health care,” he told The Epoch Times. “It’s a national scandal.”

Sikora has become well known for arguing that lockdown policies will have effects way beyond the virus.

“There’s bound to be an excess from cancer but it doesn’t happen very quickly,” he said.

The number of mortalities goes up and down in the winter and because of chest infections, not just COVID-19 but from the flu and the common cold. But also every day, winter and summer, a thousand people in Britain will be told they have cancer for the first time. Sikora has been vocal about cancer patients that have been greatly disadvantaged by lockdown policies.

Sikora highlighted factors that stopped people from accessing services. The first was the impact of the psychology of brainwashing, mainly from the government’s ad campaign: “Stay Home. Protect The NHS. Save Lives.” He said it stopped patients from suppressing the progressive symptoms of early cancer.

Other facts include a lack of face-to-face appointments and diagnostics which have all contributed to a delay in cancer diagnosis.

“All three have led almost certainly to a non-COVID increase in fatalities. Some of it, like delays in cancer, cardiac care, and surgery for heart attacks, are going to result in excess death. That’s why we are seeing excess mortality,” he said.

Sikora added that he thinks it’s likely to get worse, criticising the lack of capacity in health care in the NHS.

The stats also revealed that the number of deaths in private homes was 40.9 percent above the five-year average.

Health data analyst and lockdown critic Ivor Cummins told The Epoch Times that he knew back in 2020 “that the lockdown/mask policies would backfire, and I publicly called that out countless times in myriad interviews.”

Cummings added that he argued that “lockdowns were proven from the real-world data to be very ineffective, and could at best defer relatively few (mostly aged/frail) deaths.”

Looking at the recent numbers he predicted that lockdown will, over time, cause large numbers of premature deaths, “which will be in people who are generally far younger than the COVID-19 victim average age.”