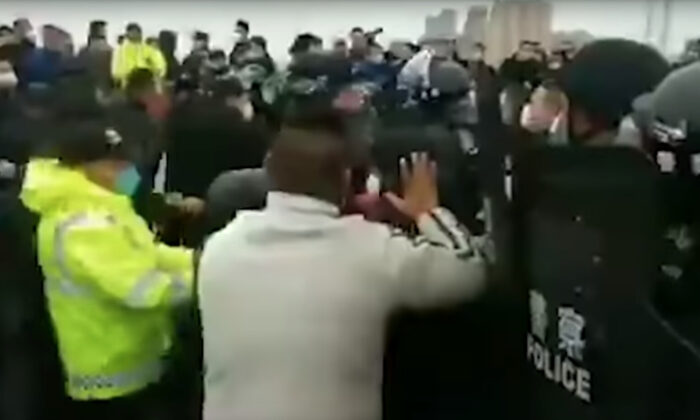 Residents from Hubei Province packed a bridge where police from the neighboring Jiangxi Province blocked their entry. (Screenshot/Social media)
By Eva Fu

A riot erupted on March 27 on a bridge connecting China’s Jiangxi Province and the virus epicenter of Hubei, where provincial authorities had lifted lockdown measures days earlier.

Footage of the incident shows residents from Hubei shouting and stomping on police cars, overturning multiple vehicles after Jiangxi police blocked them at the checkpoint on the bridge.

One video filmed from a distance showed that throngs of people had filled almost the entire length of the bridge.

At least five officers from the Jiangxi side were injured, according to a police report leaked on Chinese social media.

The report also mentioned two attacks on Hubei police officers, with a deputy police chief from the local bureau pinned to the ground and another officer seized by the throat. It is unclear if any more Hubei officers were injured.

The confrontation started from around 8:00 a.m. in the morning and continued until late afternoon, local residents said.

“They stop anyone from Hubei, and we couldn’t leave even if we tried,” Xu, a resident from the nearby Huangmei County in Hubei told the Chinese-language edition of The Epoch Times.

“They came prepared to beat people up,” she said about the police from Jiangxi, adding that they “won’t listen to reasons.”

Hubei, home to around 60 million, removed travel restrictions in regions outside Wuhan City on March 25, allowing residents to leave the province so long as they possess a “green code” to certify that they are in good health.

But elsewhere in the country, hostility and discrimination toward Hubei residents fueled by fears over the virus has been on on the rise. Migrant workers from Hubei have found it difficult to shake off this stigma as they return to work in other regions of China.

“We are quarantined and bullied once we go out,” Xu said. A dozen migrant workers that Xu knows had tried unsuccessfully to obtain work. “Once the word Hubei was mentioned, they were immediately turned down.”