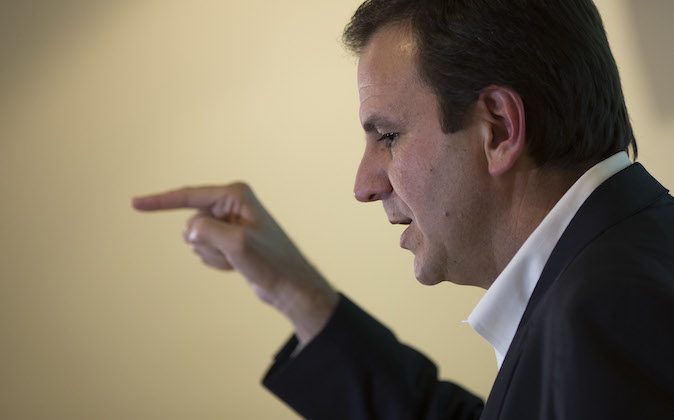 RIO DE JANEIRO—Rio de Janeiro Mayor Eduardo Paes says it was a bad idea for Brazil to spread the World Cup over 12 cities.

“We are a continental country, we are very big,” Paes said on Thursday. “We made a mistake. We should have fewer cities hosting the World Cup than we have.”

The World Cup starts in a week, but several of the 12 stadiums are still being finished, and work outside many continues with roads and sidewalks being put down, and sponsor and media areas still under construction.

Brazil is spending about $11.5 billion on the World Cup with about $4 billion going to build or renovate 12 stadiums.

FIFA requires only eight venues for a World Cup, but Brazilian politicians decided to sprinkle the games across the country, building at least four new stadiums that are expected to be white elephants when the World Cup ends in Rio on July 13.

“There was huge damage to our reputation,” he said. “When you don’t have everything ready, that is a big damage.”

Asked if Brazil had let an opportunity slip away, he replied: “I don’t think we blew it. Let’s wait until next week. We’re going to have a great World Cup.”

Paes talked openly about chronic delays plaguing the World Cup and the 2016 Olympics.

He is a key figure organizing South America’s first Olympics along with Carlos Nuzman, head of the 2016 organizing committee, and CEO Sydney Levy. The International Olympic Committee recently sent special advisers to Rio to speed preparations.

“We don’t hide our problems,” Paes said, noting that favelas — Rio’s hillside shantytowns — abut wealthy parts, particularly in the south of the city.

“Inequality is everywhere,” he said. “You see it everywhere.”

Paes suggested there would be protests during the World Cup and defended Brazilians’ right to take to the streets.

Brazil is expected to use almost 200,000 soldiers and police to secure the World Cup. The Confederations Cup last year was hit by daily protests, and tear gas wafted into Rio’s Maracana during the final between Brazil and World Cup champion Spain.

Even without protests, Brazil’s cities can be dangerous. It has 15 on a list of the world’s 50 most dangerous cities, according to Mexico-based Citizen Council for Public Safety and Criminal Justice.

“This is a safer country than lots of developed countries,” Paes said. “There are a lot of security issues going on. The cities will be pretty safe.”