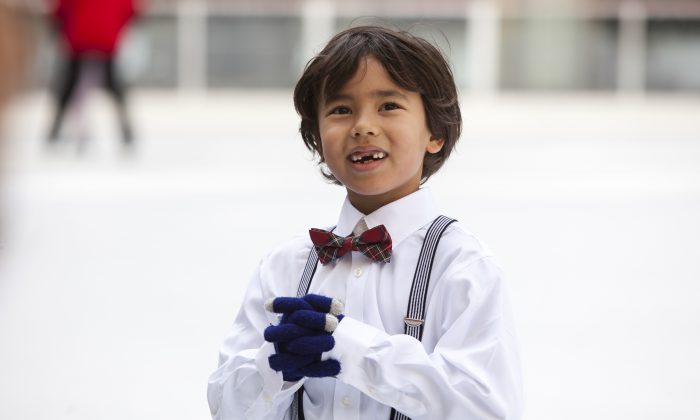 Rink at Rockefeller Center Opens to a Rising Star

NEW YORK—Louis Lorenz saw ice for the first time when his family moved to New York City from the Cayman Islands more than a year ago. And when he did, he fell in love.

The 8-year-old boy started skating just six months ago, but looked like a natural on the just opened rink at Rockefeller Center—gliding confidently with a flair for beauty and showmanship.

Kay Lorenz, Louis’s mom, said the boy fell in love with the sport when he saw an ice skater perform a quad (an ice skating move involving four and a half turns). Since then he has been watching ice skating videos on YouTube every night.

“He was so excited he couldn’t sleep last night,” said Kay Lorenz, adding that the boy wasn’t able to say anything when he met Mr. Quad. “He was too nervous, too happy. He just said, ‘Hi.’”

Louis picked out a red bowtie to go with his white shirt, black trousers, and suspenders for the big day.

The boy is aiming for the Olympic gold—something his idol, Stojko, a two-time Olympic silver medalist, has yet to achieve.

“It was surprising,” Louis said about meeting Stojko.

The ice-skating rink at Rockefeller Center is open daily through April from 8:30 a.m. to midnight.