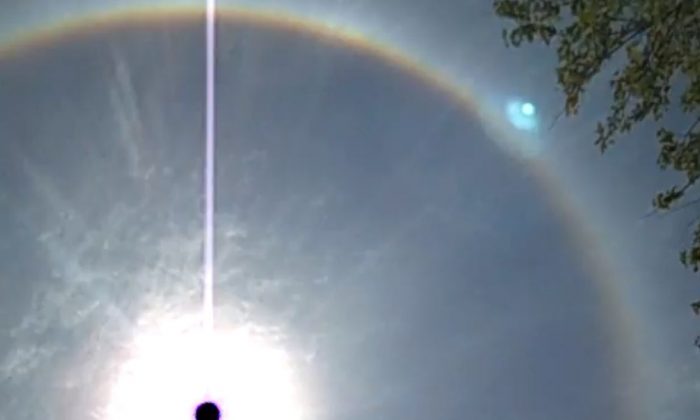 A YouTube screenshot shows a ring around the sun in Long Branch, New Jersey.
Science

Ring Around the Sun: What Causes It?

Some are questioning the origin so-called “ring around the sun” that appeared on Monday.

Reports said that the ring is a 22-degree halo, also known as a sun halo, according to ABC News. The halo is formed by small ice crystals that are contained in cirrostratus clouds. The sunlight then refracts through the ice at the 22-degree angle, creating the optical phenomenon.

Such halos can also form around the moon or around very bright, artificial lights in cold weather.

According to NOAA, there are folk tales about rings around the sun or moon.

“That is a good indication that moisture is descending to lower altitudes, where it is likely to take the form of precipitation. A halo is a more reliable indicator of storms in warmer months than during winter months,” the NOAA says on its website.

“It’s a very folklorist predictor of rain,” Walter Drag, a meteorologist with the National Weather Service, told the New Jersey Herald. “It doesn’t always work out that way, however.”