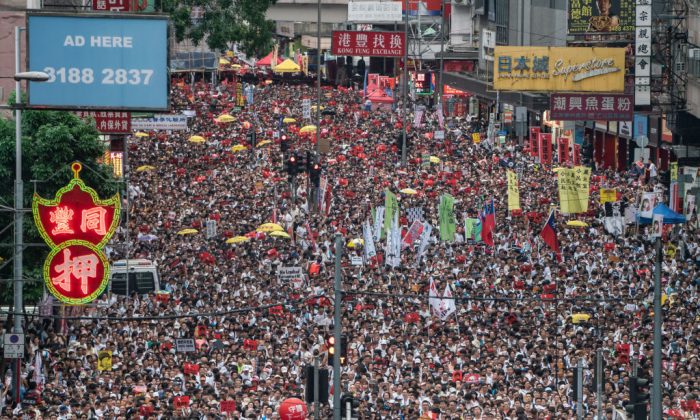 Protesters march on a street during a rally against a controversial extradition law proposal in Hong Kong on June 9, 2019. (Anthony Kwan/Getty Images)
HK Current Affairs

International rights groups are voicing concerns about Hong Kong’s dwindling freedoms after a major civil society group in the Chinese-ruled city announced on Aug. 15 that it will disband, amid a looming police investigation.

Hong Kong’s Civil Human Rights Front (CHRF), a pro-democracy umbrella group established in 2002, was the organizer behind some of the biggest rallies in the city in recent years. On June 6, 2019, more than 1 million people took part in a CHRF march, which also marked the start of the city’s anti-Chinese Communist Party, pro-democracy movement. Days later, on June 16, about 2 million Hongkongers took part in another march.

In a statement published on Aug. 15, CHRF said the decision to disband, made during the group’s meeting two days earlier, was unanimous.

“In the course of over a year, the [Hong Kong] government, in the name of the pandemic, continuously turned down march applications by the CHRF and other organizations,” the CHRF stated. “Many of our member groups are under oppression, as [the city’s] civil society is facing unprecedented challenges.”

The group said it had originally hoped to “continue to face the challenge.” However, the choice to fight on became impossible since its secretariat—an office that includes the positions of a convener, deputy conveners, and finance—had failed to maintain operations, due to the imprisonment of its convener, Figo Chan. Additionally, the group said no members had expressed a willingness to take on the work of the secretariat in the coming year.

Chan is currently behind bars after being sentenced to 18 months in prison in May for taking part in an unauthorized protest in 2019.

The group also expressed gratitude for being able to stand with Hongkongers in many different protests, including the fight against an anti-subversion bill known as Article 23 in 2003, the Umbrella Movement in 2014, and the marches against an extradition bill in 2019.

“Our calls resonated across the entire city—allowing the world to see Hong Kong, letting the light shine in the darkness, and letting democracy and freedom take root in people’s hearts,” according to the CHRF statement.

CHRF expressed hope that other groups could remain committed to their values to “support [Hong Kong’s] civil society.”

Following CHRF’s announcement, Hong Kong police issued a statement saying the group failed to comply with an information request announced in April. The police also stated that members of any organization “remain criminally liable” for any offense even if the organization disbands.

Amnesty International and Washington-based nonprofit Hong Kong Democracy Council both expressed concern about the state of Hong Kong’s society in the wake of CHRF’s announcement.

“The CHRF has organized, often in close collaboration with the police, large-scale peaceful rallies in Hong Kong for 20 years without being accused of breaking any law,” Joshua Rosenzweig, the head of Amnesty International’s China team, said in a statement.

“Its demise is yet more evidence that Hongkongers’ rights to freedom of association, expression, and peaceful assembly can no longer be taken for granted under the authorities’ obsession with ‘national security.’”

CHRF made the announcement less than a week after the city’s largest teachers’ union, the Hong Kong Professional Teachers’ Union, also disbanded due to the “drastic” political and social situation in Hong Kong. According to Rosenzweig, the two incidents aren’t isolated cases.

The regime in Beijing imposed a draconian national security law on Hong Kong last summer, punishing vaguely defined crimes such as subversion with a maximum penalty of life in prison. Now, dozens of the city’s pro-democracy opposition leaders are facing prosecution, are sitting in jail, or have fled overseas.

Samuel Chu, managing director of Hong Kong Democracy Council, said both CHRF and teachers’ union had been “pillars of Hong Kong’s civil society” and criticized the Hong Kong government for “escalating their political cleansing,” according to a statement.

“Closing the civil society space would ensure that no group or individual is visible and powerful enough to hold the regime accountable,” Chu stated.

He urged the United States and the free world to “continue to provide technical, moral, and financial support to civil society in Hong Kong.”