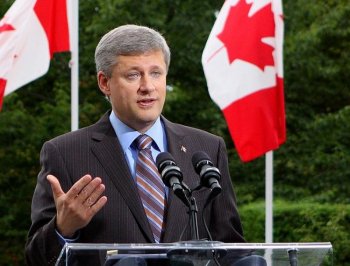 By Joan Delaney
Print
The Canada Tibet Committee (CTC) has called on Prime Minister Stephen Harper to hold off on visiting China in protest over the execution by Chinese authorities of four Tibetans allegedly implicated in last year’s uprising in Tibet.

Harper announced on October 28 that he would visit China from December 2 to 6.

Three Tibetans, Lobsang Gyaltsen, Loyak, and Penkyi were executed in Toelung, near Lhasa on October 20th for their alleged involvement in the March 2008 protests. A fourth unidentified Tibetan was also executed.

“Canada can’t stand up for human rights when Beijing sees us on our knees begging for trade,” said CTC executive director Dermod Travis in a statement.

“Today the Harper government has a choice between kowtowing to the modus operandi of the Beijing regime or defining a new relationship with China based on a multifaceted approach that puts human rights at the core of our relations.”

The visit will be Harper’s first and follows 18 ministerial-level visits to China since 2006. In June 2008, Canada announced that six new trade offices would be set up in China. Two are already operational while the remaining four are expected to be opened by the end of this year.

“Our two countries enjoy a growing partnership, sharing significant interests in trade and investment, the environment and regional security,” Harper said in a statement. “Canada is committed to a strong relationship with China that reflects our mutual respect and the need for practical cooperation.”

The CTC said that according to local sources, Gyaltsen's body and Loyak's ashes were handed over to their families by the authorities. Lobsang's wife, too poor to afford religious prayers for the deceased, had her husband’s body thrown in Kyichu River, the statement said.

As a result of the 2008 uprising, over 1,300 Tibetans remain in jail, many awaiting trial. If past trials are anything to go by, said the CTC, “it is likely that each will be denied due process, the right to independent counsel, and a fair and open trial.”

According to a 2009 report by Amnesty International, China executed more citizens than all other countries combined with 1,718 executions, or three quarters of the worldwide total, in 2008.

This year is the 100th anniversary of the establishment of a Trade Commissioner Service office in Shanghai.