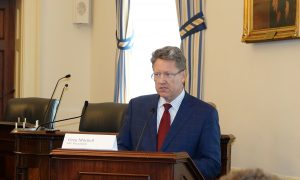 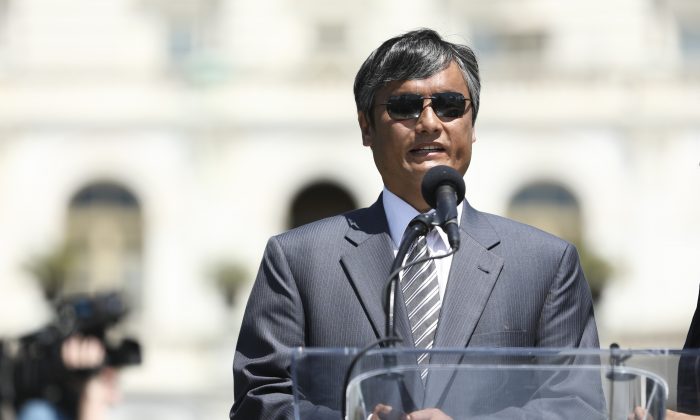 Attorney and human rights lawyer Chen Guangcheng speaks at a rally to commemorate the 30th anniversary of the Tiananmen Square massacre, on the West Lawn the Capitol on June 4, 2019. (Samira Bouaou/The Epoch Times)
China Human Rights

A U.S. lawmaker and rights advocates are calling on the government to bar Chinese officials involved in human rights abuses from entering the United States, to send a message to the regime that such practices are unacceptable.

The U.S. State Department is increasing scrutiny of visa applications and may deny visas to human rights violators, including perpetrators involved in religious persecution, according to a May 31 statement by Minghui.org, which serves as a clearinghouse on information about the persecution of the spiritual practice Falun Gong in China.

Earlier this year, a State Department official, at a meeting with various religious and faith organizations, told U.S. Falun Gong practitioners that they could submit a list of Chinese officials known to be involved in the persecution, the statement said.

“I would applaud any effort by the State Department to scrutinize the entry into the United States of … human rights violators in China,” U.S. Sen. Bob Menendez (D-N.J.) told The Epoch Times in an interview on June 4.

“It should be one of many actions that we can positively take to send the message that if you, in fact, violate the rights of Chinese citizens then you cannot come to the greatest democracy in the world, and hopefully to get others in the world to join us in the same type of actions.”

Falun Gong, also known as Falun Dafa, is a spiritual practice banned by the Chinese communist regime. For almost two decades, adherents have been the targets of a brutal persecution, with hundreds of thousands of practitioners thrown into prisons, labor camps, and brainwashing centers—where many have been tortured in an effort to coerce them into renouncing their faith.

A spokesperson with the State Department, in an email to The Epoch Times, didn’t respond to questions seeking confirmation of the measures, but wrote: “The United States seeks to ensure that individuals who have violated human rights do not secure safe haven in the United States.

Under the Immigration and Nationality Act (INA) Section 212(a)(2)(G), any person who, while serving as a foreign government official, is responsible for or has directly carried out particularly severe violations of religious freedom at any time, is inadmissible for entry to the United States.

Gary Bauer, commissioner at the U.S. Commission on International Religious Freedom, previously told The Epoch Times that he would welcome the U.S. administration’s steps in this direction.

An April report by the commission, an independent federal body that advises the U.S. government and Congress on religious freedom issues, highlighted that over the past year, the Chinese regime has ramped up its persecution of religious groups, including Falun Gong practitioners, Uyghur Muslims, Christians, and Tibetan Buddhists.

Chinese rights activist Chen Guangcheng, based in Washington, told The Epoch Times that he has submitted a list of Chinese officials involved in human rights abuses to the State Department.

Chen said the measure signifies that the U.S. administration is ramping up efforts to hold the regime to account for its crimes against humanity.

The blind lawyer and rights activist, known for his work exposing Chinese authorities’ forced abortions and sterilizations under the one-child policy, made headlines in 2012 after he made a daring escape from house arrest, fleeing to the U.S. Embassy in Beijing. Chen and his family were eventually allowed to leave for the United States.

“It’s also a warning to Beijing, [telling] all those officials to be careful,” Wei said.