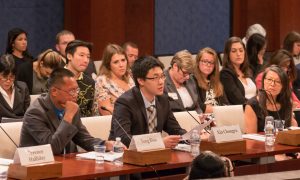 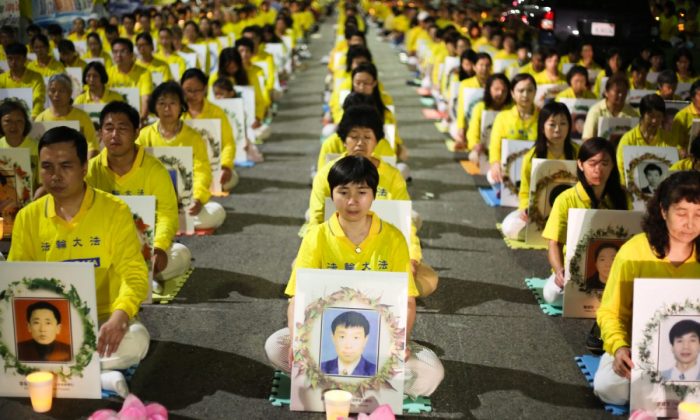 Falun Gong practitioners hold a candlelight vigil in front of the Chinese Consulate in Los Angeles for those who have died due to the Chinese regime's persecution, on Oct. 15, 2015. (Benjamin Chasteen/The Epoch Times)
China Human Rights

The U.S. Commission on International Religious Freedom (USCIRF) called out China as one of the world’s most egregious persecutors of religious faiths, in its 2019 annual report released on April 29.

Over the past year, the Chinese communist regime has ramped up its persecution of Uyghur Muslims, Falun Gong practitioners, Christians, and Tibetan Buddhists, according to the USCIRF report.

While the report highlighted a total of 16 countries as being severe violators of religious freedom, Bauer said that China stood in a category on its own, in light of the sheer pervasiveness and scope of the regime’s persecution of believers.

Compared to other violators that don’t have as much sway on the global stage, China is a rising power that is exerting its influence all over the world, he said.

“So to have this level of violation of a basic human right going on at this level is really deeply disturbing,” Bauer said.

“It’s something more countries around the world need to speak up about even if it’s something that might hurt their own economic goals.”

Conditions for religious believers have gone from bad to worse in China, the report said, under the communist regime’s efforts to “sinicize” religious beliefs, a campaign aimed to co-opt faiths that are not state-sanctioned and remain outside of the Chinese regime’s control.

“China is still an atheistic, communist country,” Bauer said. “The Communist Party there seems to feel very threatened when any Chinese citizen is giving more attention to their own spirituality and own religious faith, rather than to the requirements of the Chinese government.”

The U.S. State Department has estimated that more than 1 million Uyghur Muslims and other Muslim minorities are being held in internment camps as part of the regime’s purported efforts to combat “extremism.”

The report also stated that 1 million Party cadres have been deployed to live with Uyghur Muslim families and to report on any signs of “extremist” religious behavior—such as having an “abnormal” beard, wearing a veil, and accessing religious materials online.

Meanwhile, the regime has continued to persecute Tibetan Buddhists through its strategy of forced assimilation and suppression, the report said. These include controlling monastic education, deciding whether religious venues can be built or used for worship, and restricting religious gatherings.

The report stated that the repression of underground Catholics increased in the latter half of 2018, even after the signing of a landmark deal between the Vatican and China in September 2018 that gave the communist regime the right to appoint bishops in the place of the Holy See.

In addition, authorities closed down hundreds of house churches and Protestant congregations that refused to register with the state. They also restricted the practice of Christianity by banning the sale of Bibles online in April 2018, the report said.

The regime’s nearly two-decade-long persecution of adherents of the spiritual discipline Falun Gong, also known as Falun Dafa, was also highlighted in the report.

In 2018, the regime imprisoned at least 931 Falun Gong practitioners for practicing their faith or distributing literature about the practice in public or online, the report said, citing advocates.

Bauer also said the commission has received many credible reports that the regime is forcibly removing organs from prisoners of conscience in China, primarily from Falun Gong practitioners.

“There is credible evidence of organ harvesting,” he said.

The report added that in 2018, “human rights advocates, medical professionals, and investigative journalists presented additional evidence that the practice [of organ harvesting] continued on a significant scale.”

“It’s just hard to fathom at … [this] point in time … that this barbaric practice would still be going on, and appears to be growing in China,” Bauer said.

The regime has maintained that since 2015, organs used in China’s organ transplant system have come from voluntary donors, but independent researchers and advocates have cast serious doubt on this claim.

An in-depth 2016 report by transplant ethics group, International Coalition to End Transplant Abuse in China, found a huge discrepancy between China’s official transplant figures and the number of transplantations performed in hospitals.

By analyzing the public records of 712 Chinese hospitals that carry out liver and kidney transplants, the report showed that roughly 60,000 to 100,000 transplants are conducted each year, far outstripping the official number of 10,000 to 20,000 per year.

The report concluded that the shortfall is largely made up by organs forcibly harvested from imprisoned Falun Dafa practitioners, based on undercover phone calls to hospitals, accounts from survivors, and other evidence.

In its recommendations to the U.S. government, the commission urged the administration to issue targeted sanctions against individuals in China responsible for persecution campaigns against religious groups.

In addition, the administration should raise the issue of religious liberty and human rights across all bilateral engagements with China, including in the ongoing trade negotiations, the commission said.

The report also stressed the need to work with U.S. businesses to inoculate organizations against the regime’s influence campaigns designed to suppress information about religious liberty violations in China.

“Many American companies are so concerned about their access to the Chinese market, that they’re willing to overlook human rights violations and religious liberty violations or they are inclined to pressure our own government to not be tough on China for fear that it might affect the American businesses’ bottom line,” he said.

“And we believe that that’s unacceptable.”