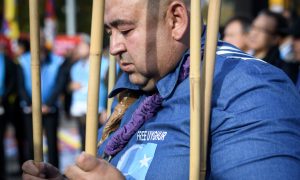 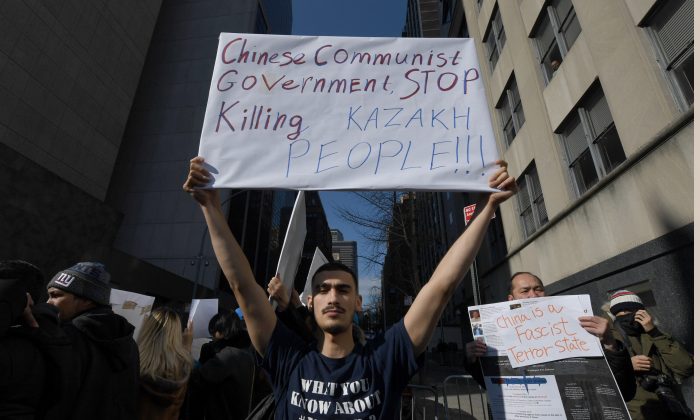 People protest at a Uyghur rally in front of the U.S. Mission to the United Nations on Feb. 5, 2019 to encourage the State Department to fight for the freedom of the majority-Muslim Uyghur population unjustly imprisoned in Chinese concentration camps. (Timothy A. Clary/AFP/Getty Images)
China Human Rights

ALMATY—Human rights activists are urging Uzbekistan to deny a Chinese extradition request for an ethnic Kazakh citizen of China who is now stuck in the Central Asian nation’s main air terminal.

Businessman Halemubieke Xiaheman, 41, from China’s Xinjiang Province, said in a video apparently recorded inside Tashkent airport building that he had been harassed by Chinese security officials to a point where his Russian and Kazakh clients were scared to work with him.

The video, as well as photos of Xiaheman’s documents, was distributed late on Feb. 7 by a group of activists based in Kazakhstan who said they were seeking to prevent Xiaheman’s extradition to China. Chinese and Uzbek authorities did not confirm that China had made an extradition request, or on what grounds.

Beijing has faced an outcry from activists, scholars, foreign governments and U.N. rights experts over what they say are mass detentions and strict surveillance of the large, mostly Muslim Uyghur population and other Muslim groups, including ethnic Kazakhs, who live in the Xinjiang region in northwest China.

Some Chinese Uyghurs have sought refuge in the countries of ex-Soviet Central Asia, with which they share ethnic and religious ties. However, Central Asian governments do not want to be seen as harboring Uyghur dissidents for fear of angering Beijing and losing out on badly-needed Chinese investment.

Steve Swerdlow, Central Asia researcher at Human Rights Watch, said returning Xiaheman to China would be “tantamount to shoving him down a dark hole.”

“Uzbekistan has a legal obligation under international law not to send a person to any country where he or she could face torture or the death penalty, even if that person is technically in a ‘transit zone’ of the airport,” Swerdlow said.

By Olzhas Auyezov. The Epoch Times contributed to this report.