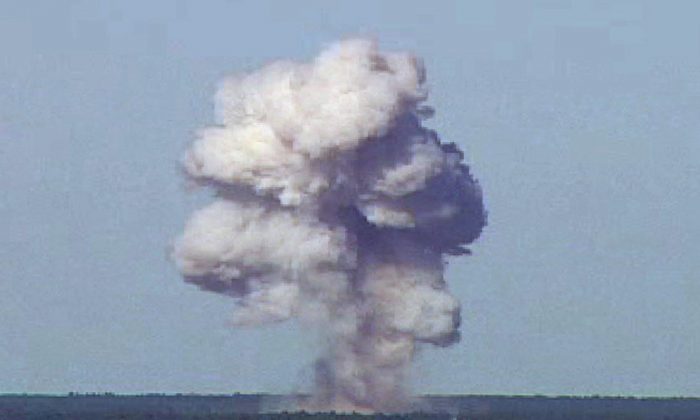 The GBU-43/B, also known as the Massive Ordnance Air Blast, detonates during a test at Elgin Air Force Base, Fla., on Nov. 21, 2003 in this handout photo provided on April 13, 2017. (REUTERS/U.S. Air Force photo/Handout via REUTERS)
International

‘Right Time’ to Use Huge Bomb in Afghanistan: US General

ACHIN, Afghanistan/KABUL—The top U.S. military commander in Afghanistan said on Friday that the decision to deploy one of the largest conventional bombs ever used in combat was purely tactical, and made as part of the campaign against ISIS-linked fighters.

As many as 36 suspected ISIS terrorists were killed in the strike on Thursday evening in the eastern province of Nangarhar, Afghan defense officials said, adding there were no civilian casualties.

Amaq, the news agency affiliated with ISIS in the Middle East, carried a statement denying that the group had suffered casualties in the attack, citing an unidentified source who had been in contact.

The statements could not be independently verified, and on Friday Afghan and foreign troops in the vicinity were not allowing reporters or locals to approach the scene of the blast.

The strike came as U.S. President Donald Trump prepares to dispatch his first high-level delegation to Kabul, amid uncertainty about his plans for the nearly 9,000 American troops stationed in Afghanistan.

Nicknamed “the mother of all bombs,” the weapon was dropped from an MC-130 aircraft in the Achin district of Nangarhar, bordering Pakistan.

Nicholson said he was in constant communication with officials in Washington, but the decision to use the 21,600-pound GBU-43 bomb was based on his assessment of military needs and not broader political considerations.

“This was the first time that we encountered an extensive obstacle to our progress,” he said of a joint Afghan-U.S. operation that has been targeting ISIS since March.

“It was the right time to use it tactically against the right target on the battlefield.”

Afghan and U.S. forces were at the scene of the strike and reported that the “weapon achieved its intended purpose,”, Nicholson said.

Afghan Defence Ministry spokesman Dawlat Waziri said no civilians were harmed in the massive blast that targeted a network of caves and tunnels that had been heavily mined.

“No civilian has been hurt and only the base, which Daesh used to launch attacks in other parts of the province, was destroyed,” Waziri said in a statement.

He was using an Arabic term that refers to ISIS, which has established a small stronghold in eastern Afghanistan and launched deadly attacks on the capital, Kabul.

The GBU-43 is a GPS-guided munition that had never before been used in combat since its first test in 2003, when it produced a mushroom cloud visible from 20 miles away.

The bomb’s destructive power, equivalent to 11 tonnes of TNT, pales in comparison with the relatively small atomic bombs dropped on Japan at the end of World War II, which had blasts equivalent to between 15,000 and 20,000 tonnes of TNT.

In Achin village, about 3 miles from the remote, mountainous area where the bomb was dropped, witnesses said the ground shook, but homes and shops appeared unaffected.

“Last night’s bomb was really huge, when it dropped, everywhere, it was shaking,” said resident Palstar Khan, adding that he believed no civilians were in the area hit.

He praised the strike, saying killing ISIS terrorists was a “positive move.”

Other residents said they were used to seeing militants climbing up and down the mountain every day, making occasional visits to the village.

“They were Arabs, Pakistanis, Chinese and local insurgents coming to buy from shops in the bazaar,” said resident Raz Mohammad.

On Friday, the village was swarming with Afghan and international troops, as helicopters and other aircraft flew overhead.

Afghan President Ashraf Ghani’s office said in a statement the attack was a part of a joint operation by Afghan and international troops.

“Afghan and foreign troops closely coordinated this operation and were extra cautious to avoid any civilian casualties,” it said.

But former president Hamid Karzai condemned the use of the weapon on Afghan soil.

“This is not the war on terror, but the inhuman and most brutal misuse of our country as (a) testing ground for new and dangerous weapons,” he said on social media network Twitter.

The Taliban, the main security threat to Afghan and NATO forces trying to quell their stubborn insurgency, also denounced the bombing.

“Using this massive bomb cannot be justified and will leave a material and psychological impact on our people,” the Taliban, who compete with ISIS in Afghanistan, said in a statement.

American officials said the bomb had been positioned for possible use in Afghanistan for “some time” since the administration of former president Barack Obama.

The United States has steadily intensified its air campaign against ISIS and Taliban militants in Afghanistan, with the Air Force deploying nearly 500 weapons in the first three months of 2017, up from 300 in the corresponding 2016 period.

Thursday’s strike was not the first time ISIS terrorists have been targeted by heavy American bombardment in Nangarhar, where a U.S. special forces soldier was killed battling militants a week ago.

Last year, B-52 bombers operating out of Qatar flew at least two missions in Afghanistan for the first time since 2006.

Such aircraft can carry as much as 70,000 pounds of bombs, missiles, or other weapons on each mission.

In March, U.S. forces conducted 79 “counterterror strikes” against ISIS in Nangarhar, killing as many as 200 militants, according to the U.S. military command in Kabul.

U.S. military officials estimate there are about 600 to 800 ISIS terrorists in Afghanistan, mostly in Nangarhar, but also in the neighboring province of Kunar.

The United Nations has raised concerns that the American air campaign is swelling civilian casualties in Afghanistan.

Last year, air strikes by international forces caused at least 127 civilian deaths and 108 injuries, up from 103 deaths and 67 injuries in 2015, the United Nations said.