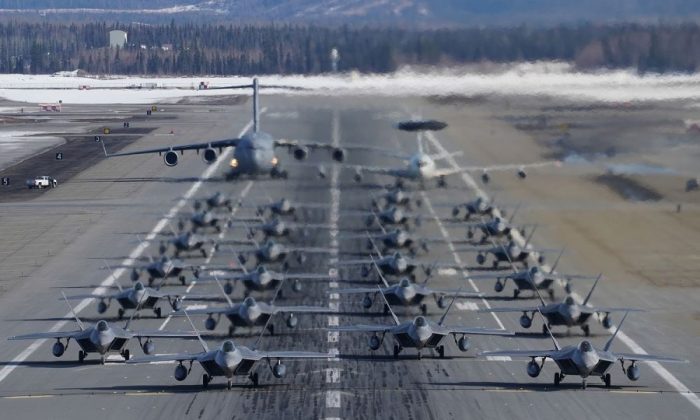 F-22 Raptors participate in an elephant walk with an E-3 Sentry and a C-17 Globemaster III at Joint Base Elmendorf-Richardson, Alaska, on March 26, 2019. (US Air Force)
Thinking About China

The Chinese Communist Party (CCP) has a long history of aggression.

Since coming to power in 1949, the People’s Republic of China (PRC) has invaded Tibet and South Korea in 1950, aggressed against India in 1962, clashed with the Soviet Union in 1969, seized the Paracel Islands in 1974 from South Vietnam, invaded Vietnam in 1979, and clashed again with Vietnam in the South China Sea in the 1980s.

This aggression did not end with the Cold War. The Chinese regime has confronted Japan over contested territory, the Diaoyu/Senkaku Islands, and declared a new air defense identification zone (ADIZ) over them, at Sokota Rock with South Korea. China clashed with India repeatedly over their disputed border. The regime threatened Taiwan (and continues to do so). Beijing militarized its facility in Djibouti. It created new islands in the South China Sea with the local military power to enforce its claims; and it has had series of clashes with the Philippines. Additionally, Beijing has rejected the Permanent Court of Arbitration 2016 ruling which found that the PRC violated international law in the South China Sea.

The transgressions continue. The Chinese regime contravened the 1984 Hong Kong agreement with Britain to crush Hong Kong and, de facto, brought Hong Kong completely under its control. The regime has imprisoned Uyghur, Kazakh, and Kyrgyz Muslims in concentration camps in Xinjiang. It has expanded its influence in Melanesia and Polynesia, and is increasingly assertive in opposing U.S. air and sea operations in South China Sea, East China Sea, and North Pacific.

China’s expansion is occurring globally, not just in the Indo-Pacific, but in Africa, Latin America, and even in the Arctic and sub-Arctic. In 2014, CCP leader Xi Jinping announced that China intends to be a polar great power. These ambitions were realized in the Jan. 26, 2018 Arctic white paper, which was notable because Beijing had never issued an official foreign policy strategy in an area outside of its geographic region. This action reveals that the CCP is confident in its growing global interests and expansionist grand strategy, as evinced by the U.S. intelligence community’s warning that the Chinese regime seeks a naval base in Equatorial Guinea for sustained naval presence in the Atlantic. These measures are intended to expand communist China’s sovereignty beyond even the ambitions of Mao Zedong.

The ubiquity and pace of the Chinese regime’s expansion is the major threat to international stability and U.S. interests today. They also suggest that Beijing is difficult to deter. To meet this threat requires immediately developing a more robust U.S. deterrent in the Indo-Pacific.

To deter the Chinese regime, the United States must take three steps.

First, the United States needs to expand its conventional military presence in the Indo-Pacific to be able to target Chinese bases, vessels, and military targets within China.

The United States simply doesn’t have the conventional capabilities in the Indo-Pacific to deter the regime’s aggression. To do so requires an expanded U.S. Seventh Fleet to include more attack submarines (SSNs), cruisers and destroyers, and additional aircraft carriers dedicated to deterring an attack.

This deterrence will require the ability to sustain attacks against targets in China. The U.S. Air Force, Army, and Marine assets must be expanded within the region to show U.S. presence and deter expansion. They must also possess the capability to attack Chinese military forces within China.

Second, as China is a nuclear state, deterrence also requires a robust U.S. nuclear arsenal as Washington must extend deterrence to its allies and friends in the Indo-Pacific. Additionally, U.S. nuclear weapons must be deployed to deter their use at any level of aggression—tactical, theater, or strategic.

Tactical nuclear weapons are necessary on the battlefield to deter China from escalating a conventional clash to a nuclear attack against U.S. tactical forces.

Theater nuclear weapons serve the same purpose within the region, deterring a tactical exchange from escalating to an intermediate range—the last step before an exchange of strategic weapons between China and the United States.

Unfortunately, since the Obama administration’s retirement of the submarine-based TLAM-N, the United States has insufficient numbers of deployed low-yield weapons—the W76-2 onboard ballistic missile submarines—and no theater nuclear weapons in the Indo-Pacific.

After decades of neglect, the United States has only recently begun to modernize its strategic nuclear forces. In stark contrast, China has exercised no inhibitions about deploying its nuclear weapons and developing new capabilities.

In early December, U.S. Defense Secretary Lloyd Austin said in Seoul: “We have concerns about the military capabilities that the PRC continues to pursue, and the pursuit of those capabilities increases tensions in the region.”

Specifically, he mentioned China’s development of new capabilities: “And we know that China conducted a test of a hypersonic weapon on the 27th of July. It just underscores why we consider the PRC to be our pacing challenge.”

This careful statement means that China is ahead in some military capability, which is adverse for the U.S. extended deterrent. And it must be addressed by increasing the budgets of the Department of Defense and the Department of Energy so that U.S. conventional and nuclear capabilities may meet the deterrent challenge of the 21st century.

A few days later at the Reagan National Defense Forum, Austin stated that Chinese incursions into Taiwanese airspace looks like rehearsals for an attack.

Send More US Troops to Taiwan

Third, the United States is fortunate to have exceptional allies that may augment U.S.-extended deterrence capabilities.

Former Japanese Prime Minister Shinzo Abe recently stated that a Chinese invasion of Taiwan would be an “emergency” for Japan, and that Tokyo and Washington could not “stand by” if China attacked Taiwan. This strongly suggests that the formidable conventional capabilities of Japan will be committed to Taiwan’s defense.

Australia’s government also has suggested it would do the same after announcing the AUKUS trilateral security pact with the United States and United Kingdom in mid-September.

Similar explicit commitments from South Korea would be welcome.

The reported doubling of U.S. troops on Taiwan is good news, but its deterrent effect is hobbled by the numbers released by Taiwanese President Tsai Ing-wen—a very modest increase from 21 to 39. These small numbers are orders of magnitude too low. As it did in the Cold War, the United States should have thousands of military personnel on the island for a credible extended deterrent.

Each of these essential steps need to be taken. The United States needs to return to the serious deterrent force posture, training, and culture it possessed during the Cold War to deter the Soviet aggression.

With the Biden administration, there is a lack of urgency in advancing any of these measures. Such insouciance, indecision, and lack of a response convey U.S. weakness and lack of credibility. In turn, doubts arise among U.S. allies concerning whether America will honor its deterrent commitments and allow the Chinese regime to continue its path of expansion, confident that the United States lacks the capabilities and willpower to contain it.