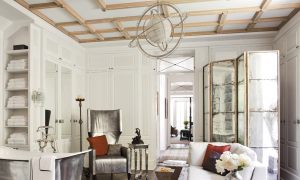 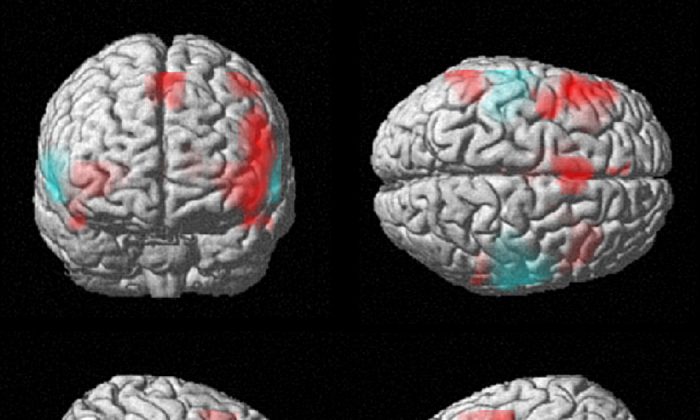 The red shaded areas are regions of the brain that are active during speech and language. In more than 90 percent of individuals, language involves predominantly the left hemisphere of the brain. (University of Utah)
Good to Know

Are you a “right-brained” or “left-brained” thinker? Are you sensitive and artistic, or logical and analytical? Are you detail-oriented or intuitive? Quizzes will tell you and books will advise you how to make the most of your hemispheric strengths.

Those personality traits have nothing to do with a preference for using left or right brain hemispheres, according to a new study from neuroscientists at the University of Utah. Connecting personality traits with right-brain or left-brain dominance is right up there with phrenology.

As usual, the truth is complex.

“It’s absolutely true that some brain functions occur in one or the other side of the brain,” stated Jeff Anderson, M.D., Ph.D., in an announcement from the University of Utah. “Language tends to be on the left, attention more on the right. But people don’t tend to have a stronger left- or right-sided brain network. It seems to be determined more connection by connection.” Anderson is the lead author of the new study, which is formally titled, “An Evaluation of the Left-Brain vs. Right-Brain Hypothesis with Resting State Functional Connectivity Magnetic Resonance Imaging.”

Over a two-year study, researchers observed that people had no preference for using one side of the brain over another. They studied resting brain scans for more than 1,000 people between 7 and 29 years old. They identified thousands of regions in each person where certain mental process happen, and found “no relationship that individuals preferentially use their left-brain network or right-brain network more often,” according to a press release from the university.

“If you have a connection that is strongly left-lateralized, it relates to other strongly lateralized connection only if both sets of connections have a brain region in common,” said Nielsen in a university release.

The researchers also found that connections went across the hemispheres, with no one side dominant in an individual. The new study is groundbreaking, according to Nielsen.

“Everyone should understand the personality types associated with the terminology ‘left-brained’ and ‘right-brained’ and how they relate to him or her personally; however, we just don’t see patterns where the whole left-brain network is more connected or the whole right-brain network is more connected in some people,” said Nielsen. “It may be that personality types have nothing to do with one hemisphere being more active, stronger, or more connected.”

The study is published in the journal PLOS ONE this month. It became available at 5:00 pm EDT on Aug. 14.