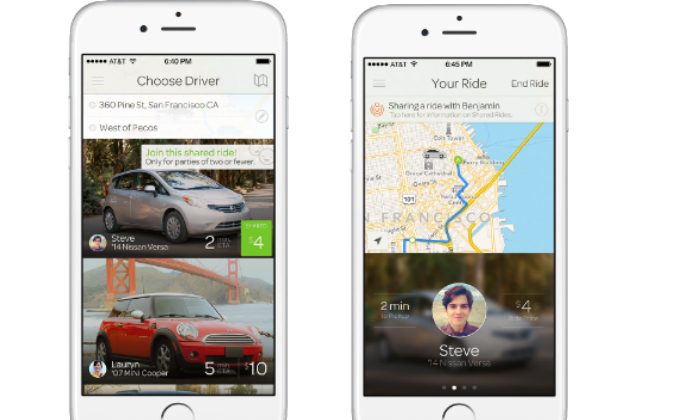 Images of the Sidecar ride-hailing app. The company announced it will shut down all operations as of Dec. 31, 2015. (Courtesy of Sidecar)
Business & Economy

Sidecar, the third largest U.S. ride-hailing service, announced it would shut down all operations on Dec. 31, as the company was squeezed out by larger competitors Uber and Lyft.

Co-founders Sunil Paul and Jahan Khanna wrote in a post on Medium.com that they have achieved their vision but are disappointed that they had to close.

“Our vision is to reinvent transportation and we’ve achieved that with ridesharing and deliveries. It is, however, a bittersweet victory. Shutting down the Sidecar service is a disappointment for our team and our fans.”

The startup company, founded in 2012, used the emerging ride-hailing model where passengers can hail a ride through a smartphone app.

The founders said they are … laying the groundwork for the next big thing.

Sidecar was the only service that allowed drivers to set their own prices to remain competitive. While this benefited consumers by offering cheaper fares, it ultimately meant the company lost revenue.

The founders said they are working on strategic alternatives and laying the groundwork for the next big thing.

Sidecar garnered $35 million from investors, but that was almost small change compared to its competitors. Uber recently reached funding levels of $1.2 billion and Lyft has obtained fundings of $680 million.

Sidecar also tried to expand its services by launching a delivery service for groceries and other items in February 2015, but Uber jumped on the same market later in October with its UberRush service.

Why Uber Leads the Market

Most ride-sharing companies offer similar services to each other. However, Uber (founded in 2009) gained prominence by spending more money and aggressively increasing its networks and marketing.

Uber started off providing black luxury cars for hire in 2010, and then in 2012 launched UberX, a low-priced service aimed at setting Uber up to lead in all price categories.

Uber has since expanded with five car-hailing options at a range of prices: UberX, UberXL (low-cost rides for big groups), UberBLACK (original luxury car), UberSUV (luxury car for big groups), and UberT (use Uber to get a taxi).

By providing more options for passengers, Uber has appealed to a wider market share.

Lyft, Uber’s closest competitor, only has two options: Lyft for one to three friends or Lyft Plus for one to six friends.

Both Uber and Lyft also have a service where passengers heading in the same direction can ride with each other for a lower price; they are called UberPOOL and Lyft Line.

Uber’s ground transportation receipts grew from 8 percent in the second quarter of 2014 to 31 percent for the same quarter of 2015, according to Certify reports.

While Sidecar and Lyft only launched operations in the United States, Uber has expanded to over 60 countries and nearly 300 cities worldwide.