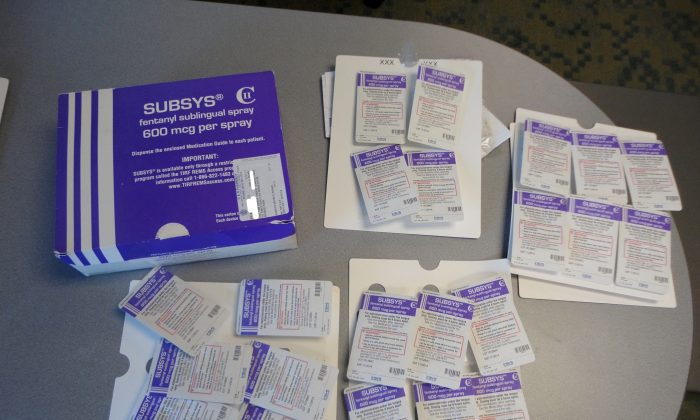 A Rhode Island doctor is to be sentenced on Friday after admitting that he took kickbacks from Insys Therapeutics Inc in exchange for prescribing a fentanyl-based cancer pain drug produced by the company.

Prosecutors have asked a federal judge in Providence, Rhode Island, to sentence Jerrold Rosenberg to 70 months in prison, saying he allowed his medical judgment to be corrupted by $188,000 in kickbacks paid by Insys disguised as speaker fees.

Prosecutors said patients with chronic pain placed their trust in Rosenberg, only to be prescribed Insys’ powerful opioid-based spray Subsys, which was approved by the U.S. Food and Drug Administration for use by people with cancer.

Two patients nearly died from overdoses, prosecutors said. They said Rosenberg continued treating patients with Subsys even when they complained of side effects, telling one who is expected to testify on Friday: “Stop crying, you’re acting like a child.”

He was indicted in February 2017 and pleaded guilty in October to charges that he committed healthcare fraud and conspired to receive kickbacks. He is scheduled to be sentenced by U.S. District Judge John McConnell.

Rosenberg, 63, is one of several medical practitioners who along with former executives and sales representatives employed by Chandler, Arizona-based Insys have found themselves facing charges amid investigations related to Subsys.

Federal prosecutors in Boston have accused seven former executives and managers at Insys, including billionaire founder John Kapoor, of participating in a scheme to bribe doctors to prescribe Subsys and to defraud insurers into paying for it.

Prosecutors said that beginning in 2012, Kapoor, ex-Insys Chief Executive Michael Babich and others schemed to bribe medical practitioners by paying them to participate in sham speaker programs.

Those “programs” ostensibly were meant to educate healthcare professionals about Subsys, yet they tended to be gatherings at restaurants and included friends and co-workers who could not prescribe the product, prosecutors have said.

Rosenberg was among the doctors who participated in the program from 2012 to 2015. He also fraudulently indicated that his patients suffered from cancer when they did not in order to secure insurance approvals for Subsys, prosecutors said.

Kapoor, Babich and their co-defendants have pleaded not guilty. Insys has said it may need to pay at least $150 million to resolve the U.S. Justice Department’s probe.

Reporting by Nate Raymond in Boston