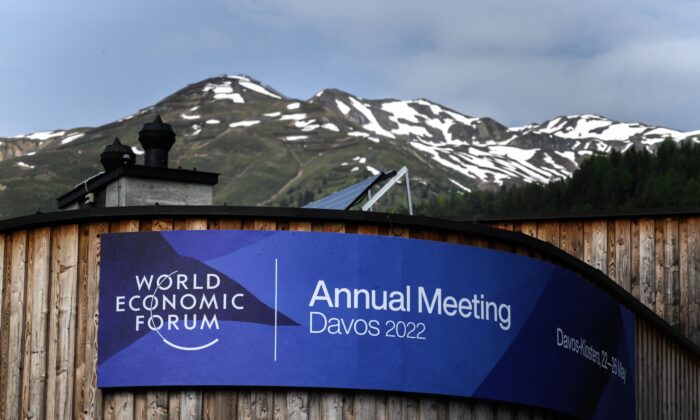 An event banner on the Congress Centre ahead of the World Economic Forum's annual meeting in Davos, Switzerland, on May 22, 2022. (Fabrice Coffrini/AFP via Getty Images)
Viewpoints

Rex Murphy: ‘Elite’ in the Current Discourse Is No Compliment

Remember Saint Barack Obama’s cocky “I’ve got a phone and a pen”?

That was the light-worker’s way of saying if he couldn’t get what he legislatively wanted through Congress and the normal conventions of Washington law-making, then he would arrogate to himself the power to do so. Mr. Obama was the progressive of all progressives, and this little boast has the force of a revelation into the progressive mind.

Part of what makes people who are determinedly progressive so obnoxious is their astonishing conviction that if they think something is right and good, why then, because they think it, it must be so.

They will dislike the analogy, but fervent progressives, like certain low-functioning evangelists, see themselves as an appointed vessel into which, by the grace of their wonderful natural character, flows all wisdom that is needed to know, as receptacles of truth itself. And thereby obliged to tinker and tamper with the world, and everyone else’s business, till all conform to their sanctified vision.

We often hear progressives described as “elites.” This has a partial truth in that so many of them—Obama again—seemed to have tripped into high station and power. In this mauled sense of the word, Hillary Clinton is an elite, as is our own Mr. Trudeau, but so also are smaller fry such as liberal mayors, TV panel-show oracles, the whole of the jet-ferried Davos crowd, and the tin-pot emperors of local school boards embracing every social justice fad and practice that reaches their tiny ears. “Elites” in the current discourse is not quite the compliment it should be.

But insofar as elite refers to, as in its real meaning it does, those holding a standard of excellence, outstanding intellectual reach, or unassailable moral character, it is a pure malaprop when applied to the self-assured, obediently conformist, and at best strivingly mediocre social activists and politicians who rabbit on about picnic forks and cricket sandwiches, and how men are women, the multiple “deaths” of the Great Barrier Reef (it is nature’s Lazarus), and who glue their stupid hands to the world’s art treasures, listen without permanent trauma to Rachel Maddow, and be-blossom their twitter feeds with a train of unheard-of, clatter-to-the-ear of “my pronouns are” unpronounceable and hideous neologisms. “Zir, I resent your cisheteronormative presence in my safe space and your erasing of my blue-haired non-binary occasionally pansexual self.” You’ve heard them. They are also, to a man-woman of them, very staunch on bike lanes in big cities—a sure sign of cognitive difficulty.

Canada, on this understanding, is a Bethlehem-haven and growth-country for such elites. The band at the top of power are so romanced by climate-warming apocalypse and even more by their delusionary role as the appointed saviours who alone can hold it off, that they subdue every other issue and purpose to this one salvational goal.

They have set more “carbon emission” targets, which function more as signals of their virtue than anything else. For of all the previous carbon emission targets, all of them, not one has ever been met. They are the always-forsaken News Year’s resolutions of political progressives—good for a one-day display and a 364-day forgetting.

Another index of the progressive mind is its perfect ability to ignore those things it can actually fix, to walk past horrendous incompetencies and mismanagement without a blush of shame, a shadow of guilt, or flutter of conscience. Boil-water advisories should be read as minor satires, a branch of literature—for all the progressive government has done to actually make them redundant. Pearson airport—the very worst on the whole wide green earth. People have been stranded at Pearson longer than the age of some of their children. Marriages have taken place near the baggage carousels, and babies from the same delivered before “the Lost Suitcase” (it should be the title of a thriller) finally showed up.

Never mind. Plastic bags have been banned. Farmers have been told to quit their assault on the atmosphere. The oil industry, which would be an asset to Canada in a Putin-threatened world, has been manacled by the eco-eremites and Mr. Trudeau’s ungoverned zeal to be as one with Al Gore, David Suzuki, and Saint Greta of Grim Greetings, to the point that Canada has no leverage in a real crisis in our time.

No matter. Let farms decay. Let oil stay in the ground. Let Pearson remain the limbo of lost luggage and tearful travellers. Let those who want passports recline in government-issued lawn-chairs. All is well.

We have a good-feeling progressive government. Our net-zero goals will shame China and India—perhaps even North Korea. Consider our accomplishments, and not our flaws.

We have banned plastic straws. We called down the Emergencies Act and staved off an insurrection from long-haul truckers—an action that deserves the glory of Waterloo and exhibited the commanding tactical genius of a Montgomery or a Custer.

We have dodged many so-called “inquiries.” Our cabinet thinks entirely as its leader, the prime minister, thinks. It is a harmony of golden mind.

And finally, our peaceful, once-called Dominion has Mr. Jagmeet Singh as the wall of defence and castle of protection against any of the impotent opposition attempts to question the Gaia-inspired wisdom of his so-fashionable Liberal partner. Both are exquisite dressers, not, alas, as common as it should be in our Zoom Parliament, where some gentlemen have actually done without trousers altogether.

It is good to be progressive. It is to be without doubt, and considering the nature of much of the Canadian media, without challenge.