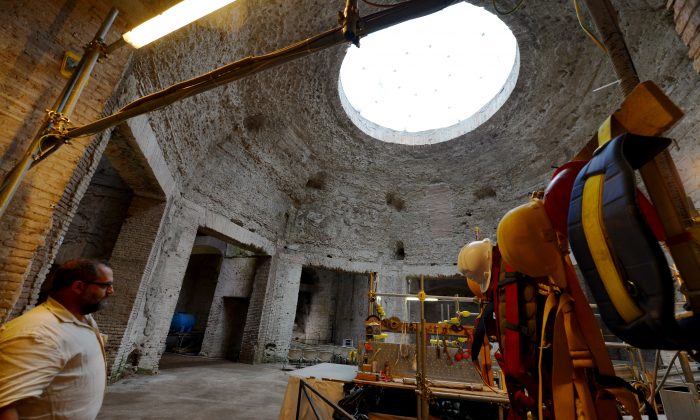 The extravagant palace of Emperor Nero, the Domus Aurea, which boasts some 300 rooms covered in dazzling polished white marble, was first uncovered in 2009 by a team of French and Italian archaeologists. Now, the luxurious palace has just revealed another surprise – a revolving dining room which once served the illustrious guests of the infamous ruler. Archaeologists have called the 2,000-year-old revolving platform one of the most peculiar and sophisticated structures of antiquity. The discovery confirms a description of the palace by ancient historian Suetonius.

Nero was Emperor of Rome from 54 to 68 AD and the last in the Julio-Claudian dynasty. He focused much of his attention on diplomacy, trade, and enhancing the cultural life of the Empire. But he was also well known for both his tyranny and his life of extravagance.  In 64 AD, most of Rome was destroyed in the Great Fire of Rome, which many Romans believed Nero himself had started in order to clear land for his planned palatial complex. He is infamously known as the Emperor who “fiddled while Rome burned” and as an early persecutor of Christians. He was responsible for many executions, including that of his mother, wife, and most likely, his stepbrother Britannicus.

The construction of Nero’s palace began soon after the great fire had cleared away the aristocratic dwellings on the slopes of the Palatine Hill. Built of brick and concrete in the few years between the fire and Nero’s suicide in 68, the extensive gold leaf that gave the villa its name was not the only extravagant element of its decor: stuccoed ceilings were faced with semi-precious stones and ivory veneers, while the walls were frescoed, coordinating the decoration into different themes in each major group of rooms.

Historian Suetonius wrote a vivid description of the palace in the ‘Lives of the Caesars, Nero’:

The description appeared so over-the-top that modern-day historians were highly doubtful that it accurately reflected the actual palace. However, the latest discovery suggests that Suetonius’ description was at least partially correct.

Archaeologists were digging on an artificial terrace on the northeast corner of Rome’s Palatine Hill when they found a round, 12-metre-high tower, with a large central pillar of four metres in diameter and 8 pairs of arches supporting two floors. Along the top of the upper arches, were lines of semi-spherical holes, filled with slippery clay – somewhat like the cavities that were used on large ships to contain primitive ball bearings, on which moveable platforms were mounted to transport heavy loads.

The lines of cavities in the structure are believed to have housed metal spheres that supported the revolving floor. At the bottom of the tower, archaeologists also found indications that a mechanism had been built into the wall.  Calcite deposits on the surrounding stones suggest that the floor’s constant movement may have been powered by water channelled through a system of gears.

Maria Antonietta Tomei, an archaeologist and former official for the Culture Ministry’s Archaeological Superintendency, which supervises the dig on the Palatine, said the discovery of the dining room sheds new light on the Emperor Nero. Although Nero has a terrible reputation, Tomei told Haaretz. “He was not just a negative figure.” And now, in her view, the mechanical and architectural sophistication of his revolving dining room highlight his passion for science and technology as well as for the arts and culture.