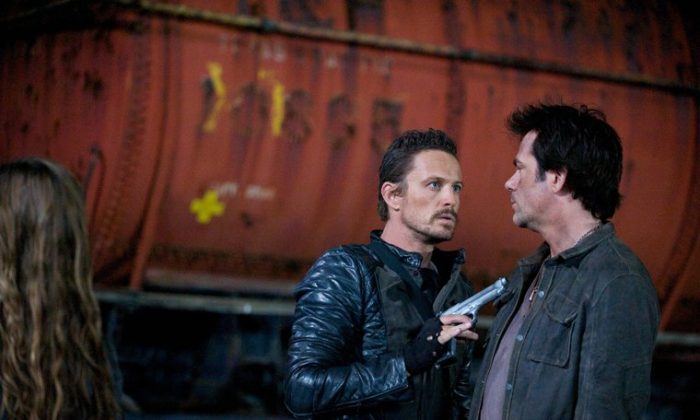 Revolution Season 3: NBC Show Not Renewed; Fans Petition to Have Another Network Step In

Revolution on NBC has not been renewed, meaning there is no planned premiere date for season 3.

The figures don’t necessarily mean that the show doesn’t have a lot of fans, though. NBC continually messed with the show’s schedule, and switched the nights that it aired on. The show started out season 2 with 6.8 million viewers, including 1.8 million viewers in the 18-49 age bracket. By episode 21, the one before the season finale, it had dropped to 3.9 million and 1.2 million.

Fans of the show have launched a petition to try to get another network to pick up the program, which is based in a world where the power has gone out after a secret Department of Defense project went wrong.

“Revolution is an amazing show that has sadly been cancelled by NBC. We are trying to get this series to continue on another network!” she said.

Many people who signed the petition left comments as well.

“This series is fantastic they always seem to want to can the good ones, please reconsider,” said Robert Carter of the United Kingdom.

“I am appalled that this show got cancelled. It was almost set up to fail when the time slot was changed. I do not know why this network continues to do this to their best shows, but I am not going to be investing anymore time into NBC shows if this trend keeps up,” added Christopher Palmer of Delaware.

“Revolution is one my favorite shows and want to keep revolution running more longer the show is still awesome for me and everybody else that likes revolution,” said Omar Masood of Virginia.

After the cancellation announcement, executive producer Jon Favreau said that he spoke with showrunner Eric Kripke.

“He’s not on social media and I told him how many messages I’ve been receiving from disappointed fans. I explained that many of you would like him to consider finding a new home for the show.

“Having a show cancelled is not fun, as you can imagine. It’s a very abrupt end to a project that has been your entire world for a long time, especially for a dedicated writer/producer/show runner like Eric. I know he pours everything he has into his work.

“I asked Eric if he had anything to pass along to the fans of the show. He said to convey that he was disappointed, but extremely grateful for your support.

“If I hear any news about the show, I will pass it along to you. Know that, though I can’t respond to all of your posts and tweets, I, like Eric and the whole Revolution family, appreciate your support. It was a fun ride and I had the pleasure to meet and work with some extremely talented and hard working people who were dedicated to doing the best job they could for you.

“And thank you to those who watched and stuck with the show. You are truly appreciated.”

No details about the potential season 3 have been released although it appears that the long-running Patriots storyline is about to come to an end.

The show was slated to wrap up season 2 on May 21, with a season finale that included Miles, Charlie, and Monroe launching an attack on the Patriots and Neville trying to kill President Davis.

Aaron and Rachel, meanwhile, were going to try to save Priscilla from the nanotech.