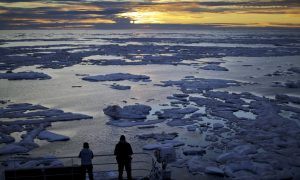 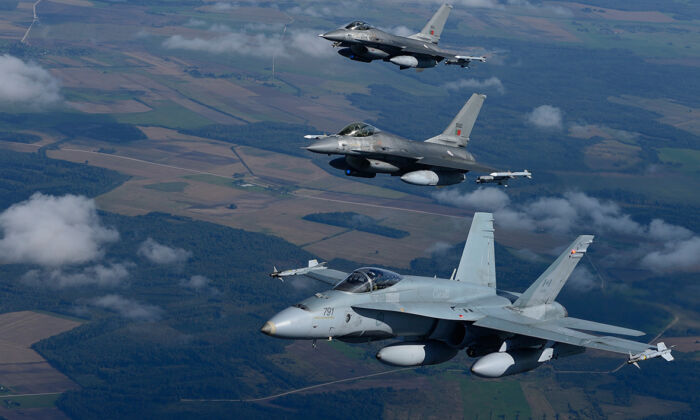 Canada has a sense that it should be active in the world as a benevolent nation. But there is a gap between the country’s aspirations to achieve these altruistic goals and its present capabilities to do so in the international sphere.

The ability to protect its sovereignty and assist its allies comes from a strong military defence program, but for quite some time, this has been lacking—most notably in the air force.

If Canadians question why Canada needs better military capabilities, military and defence expert Richard Shimooka says it’s “a chip that we can play, a chip that we can use to promote our international relations.” It’s all about diplomacy first and defence is a tool—which does not actually have to be used—that allows diplomacy and international allegiances to be strengthened.

Dealing with China is a case in point. Knowledgeable observers say Canada needs to be tough on China and not allow itself to be bullied. A capable military provides an aspect of deterrence. And having a respected military grows out of a focus from the government, an engaged public, and a culture of experience in the field.

If there are any challenges to Canada’s sovereignty, it’s in the Arctic, where less friendly countries like Russia and China are making greater investments than Canada is.

The government’s approach has been one of “risk management”—given the low chance of an international conflict affecting Canada directly, the government is relatively unprepared.

“You have this idea of supporting efforts of peace, building peace … but when the bill comes in, ‘hmm, let’s not do that,’” said Shimooka, a Macdonald Laurier Institute senior fellow.

“Policy-makers have tended to underspend in defence for decades,” he added.

“The cost is really borne by the soldiers themselves, which is horrific.”

Canada doesn’t have the level of military funding, expertise, or culture of people who were raised and educated in the field as does the United States, for example.

And in the unique position of being bounded by three oceans and sharing the world’s longest border with its long-time superpower ally, our inadequate level of defence and foreign policy literacy in comparison is becoming increasingly problematic.

The Department of National Defence (DND) said in an Aug. 9 statement that it would “continue to cooperate with the United States … to meet all threats and perils to the continent through NORAD modernization efforts.”

Canada’s dire need for military upgrades is clear from a DND news release a few weeks earlier. In the government’s July 23 announcement that it would be holding a competition to buy 88 advanced fighter jets to replace the aging CF-18s, the DND stated that “this is the most significant investment in the Royal Canadian Air Force in more than 30 years.”

The government will also be buying 18 used jets from Australia.

To buy the 88 advanced fighter jets will cost up to $19 billion. The contract is expected to be awarded in early 2022, with the first jet to be delivered in 2025. The fighter replacement program will have lasted for more than 16 years under the government’s current schedule. Shimooka says countries like Denmark and Belgium have done in 2 to 3 years what the current government has been promising since 2015.

“I think it’s a shameful display,” he said.

There have been other stumbles along the way, including a lukewarm Liberal campaign promise in 2015 that included believing that Canada could buy a Boeing Super Hornet for US$65 million—which was incorrect—instead of the Lockheed Martin F-35 at US$235 million, Shimooka says.

“If some of these things happened in the United States, it would be a national outcry,” he said. In contrast, the reaction to the Canadian government’s announcement was relatively muted.

Shimooka says the government was skeptical of the United States regarding the future of warfare—wanting to avoid bombing runs—and this influenced its political thinking on purchasing fighter jets.

He describes the situation as a “slow, winding process which meets their interest of not actually having to deal with it—so this works for them quite well.”

Canada is flying aircraft with an almost-40-year-old design, and by the time it is finally out of service, it will have a more-than-50-year-old design. Canada’s aerial capability has atrophied beyond reasonable expectations.

“The most critical for defending the sovereignty for Canada in the north … we need an airforce and we need tactical fighters,” Shimooka said.

The issue with the air force is not limited to equipment. Pilot retention becomes challenging when qualified professionals leave the military through retirement or for better opportunities and more pay as a commercial pilot.

Even if Canada’s contribution to air patrols with its allies is minimal given the substandard equipment, Shimooka points to the excellent reputation that Canadian forces have garnered in combat capabilities going back to World War I.

He says the army is in an “OK” place relatively speaking, although being deployed in multiple locations is a minor quibble due to the strain on logistics. Training is far more simplified if the army is in one place.

The government is spending about $250 million for repairs and upgrades to the reserve armouries and training facilities over the next five years. Canada is increasing its primary reserve force by 1,500 to a total size of 30,000.

Despite the numerous missteps and current predicament, Shimooka doesn’t think national defence will be a big election issue. Some of the government’s gaffes, such as the Mark Norman affair and dawdling on revitalizing the air force, are likely lower priorities on most voters’ minds.

“Whether that resonates with the Canadian public … my guess is probably not to a very high level,” he said.