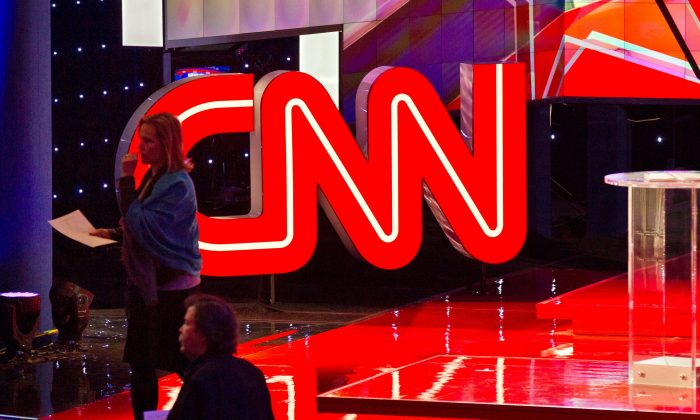 The stage for the Republican presidential debate, hosted by CNN, at The Venetian hotel in Las Vegas, Nev., on Dec. 15, 2015. (L.E. Baskow/AFP/Getty Images)
By Petr Svab

With special counsel Robert Mueller wrapping up his probe and recommending no further charges, legacy media’s breathless coverage of the theory that Donald Trump colluded with Russia to usurp the presidency suffered a gut punch.

On the nightly newscasts of just three broadcast networks—ABC, CBS, and NBC—a combined 2,284 minutes of “collusion” coverage has aired since Jan. 20, 2017, the Media Research Center reported. That doesn’t include the thousands upon thousands of articles published by legacy press outlets and the avalanche of coverage on cable networks.

The coverage has been marked with embarrassing mistakes and false reports, such as those repeatedly promising a smoking gun on the collusion theory, only to be debunked or later retracted.

A day before former FBI Director James Comey testified to Congress on June 8, 2017, CNN ran a story that claimed that Comey was “expected to refute Trump” and to “dispute … Trump’s interpretation of their conversations.”

Trump said that Comey had repeatedly assured him that he was not under investigation. But CNN reported that three “sources familiar with Comey’s thinking” had said Comey was going to explain that he had not given the president any such clear assurance.

The next day, under oath, Comey said, “I offered that assurance.”

Just a few weeks later on June 26, 2017, CNN reporter Thomas Frank, editor Eric Lichtblau, and executive editor Lex Haris resigned over their involvement in a debunked story about Trump’s then-adviser Anthony Scaramucci. The story claimed, among other issues, that the Treasury was looking into whether Scaramucci discussed lifting sanctions at a meeting with a Russian banker during the World Economic Forum in Davos, Switzerland, four days before Trump’s inauguration. CNN eventually deleted the story and apologized to Scaramucci.

Neither ‘Donations’ nor ‘Donor’

On Aug. 31, 2017, NBC News claimed that “Paul Manafort’s notes from a controversial Trump Tower meeting with Russians during the 2016 presidential campaign included the word ‘donations,’ near a reference to the Republican National Committee,” according to “two sources briefed on the evidence.”

Manafort shortly served as Trump’s campaign manager and was recently sentenced for crimes probed by Mueller but unrelated to the campaign or the “collusion” allegations.

NBC News edited its story by the next day to say that Manafort’s notes actually only included the word “donor,” according to one of its sources. But “government officials and others who have looked at the notes” told Politico that not even the word “donor” appeared in the notes, which were “not seen as damaging to the Trump family or campaign officials.”

Republicans Paid for the Dossier?

Multiple journalists made the erroneous claim that Republicans initially paid for the infamous Steele dossier, a collection of unsubstantiated claims about alleged Trump–Russia collusion. Some Trump opponents on the Republican side indeed hired the same opposition research firm, Fusion GPS, to dig up information on Trump. But they withdrew the funding before the firm hired Steele for the job.

It was actually the Democrats and former Secretary of State Hillary Clinton who paid for the dossier.

On Dec. 1, 2017, ABC News’s Brian Ross said on air that Trump’s former national security adviser Michael Flynn was “prepared to testify that President Trump, as a candidate … ordered him to make contact with the Russians, which contradicts all that Donald Trump has said at this point.”

Shortly after, the stock market tumbled with the Dow Jones Industrial Average losing 350 points before recovering some.

Yet hours later, Ross came back with a “clarification”: Trump only asked Flynn to contact the Russians after he was elected. Indeed, it was Flynn’s job during the transition to contact representatives of foreign governments to lay down the diplomatic groundwork for the incoming administration.

Ross was suspended for the gaffe and later left the network.

Just a week later, CNN extensively covered a bombshell revelation: Donald Trump Jr. was given early access on Sept. 4, 2016, to the emails of former Secretary of State Colin Powell allegedly hacked by the Russians. Yet shortly after, multiple media reported that the supposedly incriminating message Trump Jr. received granting him access to the emails was actually sent on Sept. 14—a day after the emails were released publicly.

On May 3, 2018, NBC News reported that federal investigators had, for weeks, wiretapped the phone lines of Trump’s then-lawyer Michael Cohen, “according to multiple senior officials and individuals with knowledge of the legal proceedings involving Cohen.” The story even stated that at least one call with the White House was intercepted. The claim was significant because wiretaps must be approved by a federal judge and require proof of an ongoing crime, said NBC News’s own analyst, Former U.S. Attorney Chuck Rosenberg, in the original article.

But later that day, NBC News issued a correction and rewrote the story, saying that the investigators had looked at the log of who called or were called from Cohen’s lines rather than wiretapped them (listened to the calls themselves). The correction came after three senior U.S. officials disputed the original story, the correction stated.

On Jan. 18, BuzzFeed reported that Mueller’s office had learned about Trump instructing Cohen to lie to Congress. “Cohen then acknowledged those instructions during his interviews with that office,” the report stated.

Yet, in a rare move, the Mueller office rebutted the report.

“BuzzFeed’s description of specific statements to the special counsel’s office, and characterization of documents and testimony obtained by this office, regarding Michael Cohen’s congressional testimony are not accurate,” the office’s spokesman Peter Carr said in a statement.

The reporters behind the story, Jason Leopold and Anthony Cormier, still tried to defend the story, giving somewhat diverging details on whether they had actually seen the underlying documents they claimed as one of their sources.

But The New York Times and The Washington Post, citing anonymous sources, reported that the Mueller statement was meant as a full rebuttal of the core claims of the BuzzFeed story.