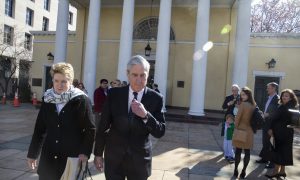 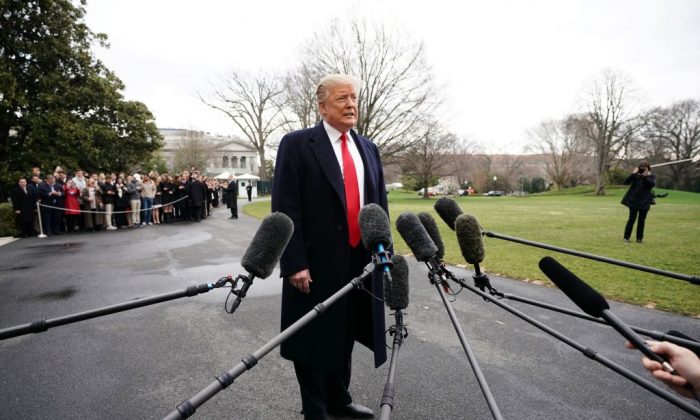 US President Donald Trump speaks to the press before boarding Marine One as he departs from the South Lawn of the White House in Washington, on March 22, 2019. (Mandel Ngan/AFP/Getty Images)
Trump Administration

Here Is How Many Articles, Hours of TV, Likes, and Shares Mueller Probe Fueled

The investigation by special counsel Robert Mueller vindicated President Donald Trump on March 24, but not before mainstream media outlets devoted a staggering amount of coverage to the investigation.

The Washington Post, The New York Times, CNN, and MSNBC led the charge, writing more than 8,500 articles on the investigation since Mueller was appointed in May 2017, according to research by the Republican National Committee (RNC).

Much of the coverage insinuated that Trump or his campaign associates conspired with Russia. The coverage continued even after the House Intelligence Committee concluded more than a year ago that there was no evidence of collusion.

In the meantime, television networks devoted 38 hours of coverage to the Russia-collusion story, most of it after Mueller was appointed as the special counsel, according to a review of news coverage by the Media Research Center (MRC).

“That’s an average of roughly three minutes a night, every night, for an astonishing 791 days—a level of coverage normally associated only with a major war or a presidential election,” Rich Noyes, a senior editor at MRC, wrote in an analysis of broadcast coverage. “Since his presidency began, nearly one-fifth of all of Trump’s evening news coverage has been about this one investigation.”

ABC, CBS, and NBC devoted more coverage to the collusion narrative than any other area of the Trump administration’s work, including immigration, tax reform, trade, North Korea, the war against ISIS, the booming economy, veterans’ affairs, and the opioid epidemic. A combined 20 million people watch the ABC, CBS, and NBC evening news broadcasts.

The networks sustained the collusion narrative while delivering overwhelmingly negative coverage of the Trump presidency, with more than 90 percent of all evening news coverage angled to cast a negative light on Trump.

The Mueller investigation fueled a vast number of social media posts and engagements. The special counsel’s investigation resulted in 533,074 articles on Twitter and Facebook, which have garnered 245 million interactions, according to Newswhip data shared by Axios.

Based on spending numbers through September 2018, Mueller’s investigation cost American taxpayers $50,230 per day.

In addition to exonerating Trump and his associates from allegations of conspiring with Russia, Barr also concluded that Trump did not obstruct justice.

The president called Barr’s summary of Mueller’s report a “complete and total exoneration.”