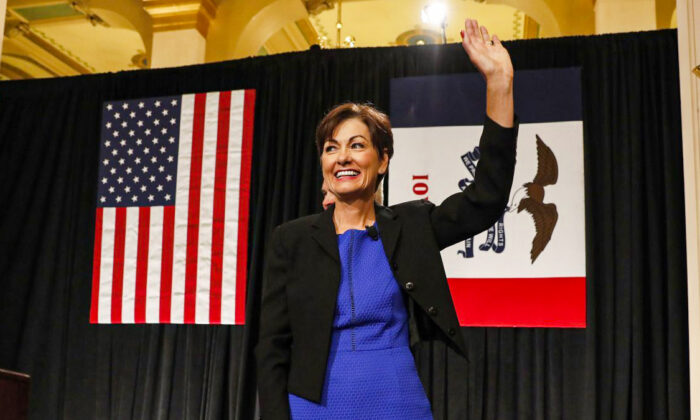 Iowa Gov. Kim Reynolds waves after speaking during a ceremonial swearing-in at the Statehouse in Des Moines, Iowa on May 24, 2017. (AP Photo/Charlie Neibergall)
Constitutional Rights

The Supreme Court of Iowa on June 17 overturned a four-year-old decision it made that had held the Iowa Constitution guarantees the right to abortion, and determined the state constitution doesn’t provide any such guarantee.

The move allows the Republican-controlled Iowa General Assembly to move forward with plans to restrict or possibly prohibit abortions in the state.

The state court ruling came as Americans await the U.S. Supreme Court’s ruling in Dobbs v. Jackson Women’s Health Organization, which a leaked drafted majority opinion suggests will overturn Roe v. Wade, the seminal 1973 precedent that federalized abortion policy, overriding the states and making the procedure lawful throughout the entire United States. The landmark 7–2 decision held that a woman’s right to an abortion was safeguarded by her right to privacy under the 14th Amendment.

The ruling also came a month after both chambers of the Iowa General Assembly approved a proposed amendment to the Iowa Constitution stating that “this Constitution does not recognize, grant, or secure a right to abortion or require the public funding of abortion,” as The Epoch Times reported. To take effect, the amendment must be agreed to by two successive General Assemblies and ratified by a majority of Iowa voters.

If Roe v. Wade is overturned, Iowa lawmakers would presumably not have to continue pursuing an anti-abortion amendment to the Iowa Constitution in order to roll back protections for the procedure.

In Planned Parenthood of the Heartland v. Reynolds, court file 21-0856, the abortion-rights group and abortion provider challenged the constitutionality of a law mandating a 24-hour waiting period in the state for an abortion. In a 182-page opinion (pdf), the Supreme Court of Iowa held the state’s constitution “is not the source of a fundamental right to an abortion.”

The court reversed a district court’s grant of summary judgment to Planned Parenthood and remanded the waiting period case to that court “for further proceedings consistent with this opinion.”

In a 2018 ruling, the Supreme Court of Iowa found that abortion was protected by the state constitution. The court ruled at the time that “autonomy and dominion over one’s body go to the very heart of what it means to be free.”

But in its new decision, the Iowa court held that its 2018 ruling “insufficiently recognizes that future human lives are at stake.”

“Although we overrule PPH2 [i.e. the 2018 decision], and thus reject the proposition that there is a fundamental right to an abortion in Iowa’s Constitution subjecting abortion regulation to strict scrutiny, we do not at this time decide what constitutional standard should replace it,” added Justice Edward Mansfield, author of the new majority opinion.

The composition of the state’s high court has changed in the four years since Republican Gov. Kim Reynolds, an outspoken pro-life advocate, took office. Reynolds has appointed four justices, which means six of the seven members of the court have been named to it by Republican governors.

“Today’s ruling is a significant victory in our fight to protect the unborn,” she said.

“The Iowa Supreme Court reversed its earlier 2018 decision, which made Iowa the most abortion-friendly state in the country. Every life is sacred and should be protected, and as long as I’m governor that is exactly what I will do.”