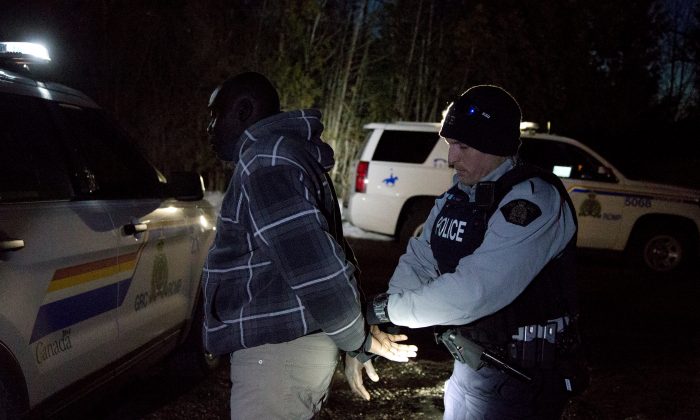 A man who claimed to be from Sudan is handcuffed by a Royal Canadian Mounted Police (RCMP) officer after he illegally crossed the U.S.-Canada border leading into Hemmingford, Quebec, Canada on March 20, 2017. (REUTERS/Christinne Muschi)
International

WINNIPEG, Manitoba/OTTAWA—Nearly half of Canadians want to deport people who are illegally crossing into Canada from the United States, and a similar number disapprove of how Prime Minister Justin Trudeau is handling the influx, according to a Reuters/Ipsos opinion poll released on Monday.

The increasing flow of hundreds of asylum-seekers of African and Middle Eastern origin from the United States in recent months has become a contentious issue in Canada.

There has been broad bipartisan support for high levels of legal immigration for decades in Canada. But Trudeau has come under pressure over the flow of the illegal migrants. He is questioned about it every time he appears in parliament, from opponents on the left, who want more asylum-seekers to be allowed in, and critics on the right, who say the migrants pose a potential security risk.

Canadians appeared to be just as concerned about illegal immigration as their American neighbors, according to the poll, which was conducted between March 8-9. Some 48 percent of Canadians said they supported “increasing the deportation of people living in Canada illegally.” (For graphics on asylum process, immigration poll see http://tmsnrt.rs/2nyY8CJ)

In the United States, where President Donald Trump was elected partly on his promise to boost deportations, 50 percent of adults supported “increasing the deportation of illegal immigrants,” according to a separate Reuters/Ipsos poll that was conducted during the same week in the United States.

Illegal migrants interviewed by Reuters in Canada said they had been living legally in the United States and had applied for asylum there. But they had fled to Canada for fear of being caught up in Trump’s immigration crackdown.

In the poll, support for deporting the border crossers was strongest among men, adults who do not have a college degree, people who are older and those with higher levels of income.

“There are so many people in the world who want to come in and go through the right channels,” said Greg Janzen, elected leader of a Manitoba border municipality that has seen hundreds of border crossers. “That’s what’s pissing most people off. These guys are jumping the border,” he said.

Forty-six percent of Canadians feel the influx would have no effect on safety, while 41 percent said it would make Canada less safe, according to the poll.

“Refugees are much more welcomed when we have gone and selected them ourselves as a country, as opposed to refugees who have chosen us,” said Janet Dench, executive director of Canadian Council for Refugees.

Of those polled, 46 percent disagreed with how Trudeau was handling the situation, 37 percent agreed, while 17 percent did not know. In January, a separate Ipsos poll found that 59 percent of Canadians approved of Trudeau, while 41 percent disapproved.

Trudeau faces no immediate threat, since the next elections are not until 2019. Trudeau’s office declined to comment on the poll, as did the opposition Conservative Party.

Brian Lee Crowley, head of the Macdonald-Laurier Institute public policy think-tank, said the number of illegal migrants could spike as the weather warms, and “if people become convinced there’s a large uncontrolled flow of illegal immigrants, I think that will be a very serious political issue for the government.”

Canadian authorities dismiss the idea they are being lax.

Dan Brien, a spokesman for Public Safety Minister Ralph Goodale, said “trying to slip across the border in an irregular manner is not a ‘free’ ticket to Canada,” noting that all asylum-seekers were detained.

“If they are found to be inadmissible without a valid claim, deportation procedures are begun,” he said by email when asked about the poll.

According to a separate Ipsos poll in Canada, 23 percent of Canadians listed immigration control as among the top national issues in March, up from 17 percent in December. It ranks behind healthcare, taxes, unemployment and poverty as top concerns.

The Reuters/Ipsos poll was conducted online in English and French throughout Canada. It included responses from 1,001 people who were at least 18 years old. Individual responses were weighted according to the latest population estimates in Canada, so that the results reflect the entire population.

The poll has a credibility interval, a measure of accuracy, of 4 percentage points.