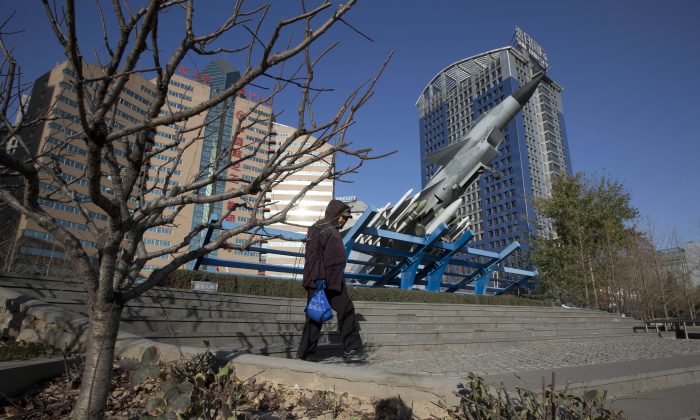 A Chinese woman walks near a replica of a Chinese fighter jet displayed in Beijing on Nov. 27, 2019. (Ng Han Guan/AP Photo)
By Olivia Li

Retired employees from China’s top aircraft company took to the streets to demand the authorities to help them reclaim their pensions and to protest against corruption. Netizens allege that the missing retirement funds could be linked to a senior director of the parent company who committed suicide last month after authorities suspected he embezzled a huge amount of money.

A video which was posted online on Jan. 8 and later obtained by Radio Free Asia (RFA) shows a group of people protesting in Xi’an City, Shaanxi Province. Some were seen holding up two banners. One of them read, “Say no to exploitation, say no to deception;” the other read, “We need pensions to feed ourselves.” Social media users and netizens claimed that the demonstrators are a group of retired employees of Xi’an Aircraft Industrial Corporation, and they were protesting because they have not yet received their pension payments, according to the RFA report.

Engineers at Xi’an Aircraft Industrial Corporation were the main team responsible for the development of China’s JH-7 fighter aircraft, also known as the “flying leopard.” The company, based in Shaanxi Province, develops medium- and large-sized aircraft.

The video got a lot of attention on Chinese social media because it is well-known in the mainland that the country’s researchers and scientists of military technology earn high salaries and can easily enjoy an affluent retirement—but this is not the case for the retired employees of Xi’an Aircraft.

Some netizens pointed out that Li Shouze, the deputy general manager of Aviation Industry Corporation of China (AVIC)—the parent company of Xi’an Aircraft Industrial Corporation—was involved in corruption, according to RFA. Li passed away on Dec. 6 of last year at the age of 58, but major state media did not announce his death until Dec. 16, nor did they reveal the cause of his death.

Li’s mysterious death and the obscure reports thereafter prompt some netizens and social media users to suspect that Li was involved in embezzling funds.

A Dec. 13 report from VEWAS Chinese, an overseas news website, claimed that Li embezzled 800 million yuan ($115.6 million) during the development of the Xi’an Y-20 aircraft, a type of large military transport aircraft. Li committed suicide by jumping off a high-rise building when he learned that he would be investigated, the report said.

He has also been involved in many key military research projects, including JH-7 series, KJ-2000, SAIC Eaglet 500, and Y-20 aircraft. Li was the chief responsible person for the development of KJ-2000, a Chinese airborne early warning and control system.