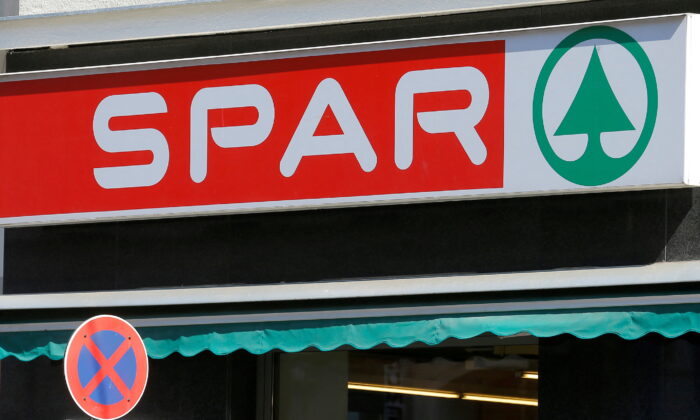 The logo of Austrian supermarket chain Spar is seen behind a traffic sign at a shop in Vienna, on July 11, 2016. (Heinz-Peter Bader/Reuters)
Gold and Commodities

LONDON—As energy bills mount and the threat of rationing increases, some European retailers are turning off lights and considering shorter opening hours this winter.

Energy bosses and government officials have urged people and businesses to reduce power use and put in place contingency plans so they are less reliant on gas imports if there are shortages linked to the war in Ukraine.

SPAR Austria is reducing the hours of lighting for storefront advertising and outside its more than 1,500 stores across the country, a spokesperson said in an email. The business, which operates over 1.2 million square metres (12.92 million square feet) of store floor space, posted retail sales of 8.56 billion euros ($8.86 billion) last year.

The move will reduce the retailer’s energy consumption by 1 million kilowatt hours annually, the spokesperson said, without saying how much money would be saved.

Last month, the head of Leclerc warned that France’s largest food retailer could reduce opening hours at its stores to deal with power shortages.

Some retailers, including Belgium’s Colruyt and Ahold, might be partly insulated from potential disruptions and the higher costs due to existing sustainable energy programs that conserve power.

“No concrete measures are planned in the short term, but the firm ambition is to continue the efforts as part of our overall energy policy,” a Colruyt spokesperson said. “That’s why we don’t have any illuminated signs, we opt for closed freezers, a cold room, etc.”

The company has 44 “zero fossil fuel” stores, which do not use fuel oil or natural gas, but are instead heated entirely by waste heat and green electricity, the spokesperson said.

Ahold is also looking for ways to cut its energy usage, chief executive Frans Muller said in an interview.

“We have not made any decisions on opening times but we’re looking much more at the use of energy,” he said.

The company already had some gas-saving programs in place, including running its Albert Heijn stores entirely on sustainable energy next year.