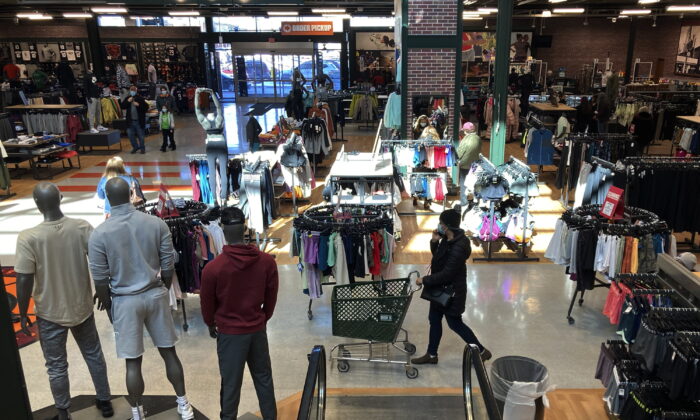 U.S. retail sales rose 1 percent in June, largely due to higher prices for food and gas, led by inflation and not sales volumes, according to the Commerce Department on July 15.

The small increase in retail sales last month was not adjusted for inflation, with sales likely falling 0.2 percent when taking the 1.3 percent inflation rate into account.

The report came after another release by the Labor Department on July 13 showing U.S. inflation up 9.1 percent in the 12 months ending in June.

On July 14, the department said that inflation at the wholesale level, before it reached consumers, increased 11.3 percent since June 2021.

Consumer spending nationwide last month increased more than had been expected, with many Americans still spending, despite high inflation.

Economists polled by The Wall Street Journal had forecast a 0.9 percent increase in retail sales, which have begun to flag since last month, after surging since the end of 2020.

Still, it is a contrast from May, when retail spending declined by 0.1 percent, after Commerce initially reported sales dropping 0.3 percent for that month.

Retailers are dealing with the effects of high inflation, as customers are becoming more selective in their purchases, with chains like Target and Walmart offering huge discounts after ending up with a glut of inventory.

Many Americans have been spending less on clothes and retail and more on food and services.

Restaurants and bars have seen a 1 percent boost in earnings last month, a sign that American consumers still remain confident for now.

Online sales rose 2.2 percent, and furniture and home store sales were up 1.4 percent.

Brick-and-mortar sales fell, with general items down 0.2 percent due to a 2.6 percent decline in retail sales.

Gas prices, which were the greatest driver of inflation in the United States over the last 12 months, rose by almost 50 percent since June of last year, while food and drink prices rose 13.4 percent.

Gas station revenue jumped 3.6 percent in June, as the average cost of a gallon of gas topped $5 for the first time, but has fallen since the start of this month, offering drivers mild relief.

Higher energy prices did not stop a rise in vehicle and parts sales in June, which saw a 0.8 percent increase, as automakers sold more vehicles at higher prices.

When not taking gas and auto sales into account, retail sales were reduced to a 0.7 percent increase last month.

Consumer sentiment remains relatively depressed; a separate report from the University of Michigan registered a reading of just 51.1.

The U.S. economy has shown signs of slowing down over the last two quarters, adding pressure on the Federal Reserve to aggressively raise interest rates in order to combat inflation.

The Fed is attempting to slow growth by discouraging consumers and businesses from spending or investing too much with higher rates, to keep prices under control.

Central bank policymakers are expected to approve another rate hike later this month that could hit a full percentage point, the largest such increase since 1994.

Fed governor Christopher Waller said that the retail sales report would be a key input in determining whether to hike rates by 75 or 100 basis points at the upcoming July 26–27 FOMC meeting.