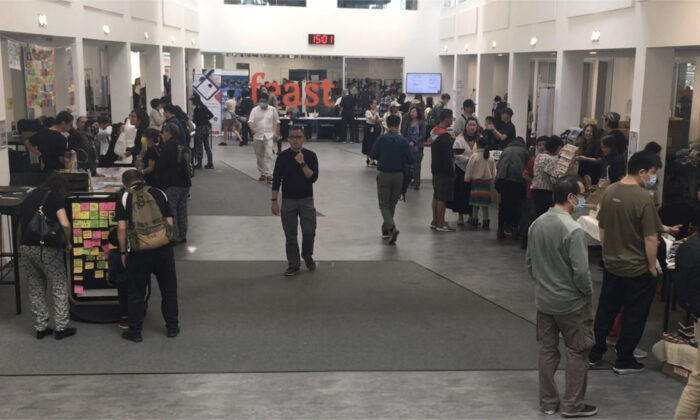 “Repower Hkers: Reviving Civic Rights for Hongkongers,” a seven-session forum held in a school in Hayes, London on June 11 and 12, 2022, hosted by the newly founded Association of Overseas Hong Kong Media Professionals, discussed the disintegration of civil society in Hong Kong and the ways Hongkongers might face such changes. It was joined by renowned speakers such as Joseph Lian Yizheng, Victor Ng Ming-tak, Lee Yee, Stephen Shiu Yeuk-yuen, Chung Kim-wah, Ching Cheong and Benedict Rogers. It attracted 1,600 Hongkongers, and all sessions were well-attended.

Besides conducting academic discussions, the issue of how to practically connect with Hongkongers in Britain was also addressed. A number of Hongkonger stores were invited to the venue to offer relevant services and products; snacks were provided as the visitors attending the marathon discussions certainly needed refreshment breaks, especially so as the venue is remote from a shopping area. Among them, the one I liked most is “Gathering Leaves Hong Kong,” a library in London that keeps a good stock of Hongkonger books, newspapers like the defunct Apple Daily, and propaganda items from the past protest movements, all of which are useful to help overseas Hongkongers consolidate their spiritual foundation and gather the strength to move forward.

However, it was this diversified “Hong Kong fair” that caused controversies; it was accused by some radical KOLs of staging a “carnival” to eat “human blood dumplings”—a Hong Kong phrase denoting gaining personal advantage at the cost of sacrificing or ignoring the victims—on the anniversary of the 612 protest, a major event of the 2019 Anti-Extradition Movement. It was said there was even pressure to cancel the forum.

Under the unprecedented social divide in Hong Kong in the 2010s, it is natural that people in different positions in the political spectrum think and act differently. Fundamentalists will certainly not agree to the comment made at the forum by historian Gavin Chiu Sin-hin, “carrying water and chopping wood are all wonderful paths of cultivating virtue.” which is a famous Zen quote. They tend to apply the concept of purity of resistance to commemorations of major protest events that any form of material consumption is sacrilege to the protest movements and their commemorations. The resulting controversies, which otherwise may not exist in similar commemorations in other cultural contexts, reflect some shortcoming that has long been there in Hong Kong’s civil society. Let’s illustrate my point using the failure of the food truck pilot scheme in Hong Kong.

In 2017, the Tourism Commission launched the scheme with an objective “to add fun and vibrancy to Hong Kong’s tourist attractions,” at an accumulated cost of HKD 40 million (US$5.3 million). About a dozen trucks were licenced. After five unaccomplished years, the scheme came to an end in 2022.

If a Briton is told of promoting a food truck scheme using such a huge sum of government money, he or she is likely aghast, and will find it crazy if further told that a food truck owner needs to pay as high as HKD 390 thousand (US$50 thousand) to bid for a place in a lunar Chinese New Year fair. “Why does a government need to pay? In Britain, a food truck owner only needs to pay 135 pounds (about US$167 or HK$1,300) for the licence and can operate at a variety of locations. We Britons have a strong sense of community. Towns have regular local markets that offer lots of opportunities for food trucks, as do construction sites. And fun fairs during school holidays. Besides food trucks, we also have meat trucks selling a variety of meat. Mobile business is common here.”

There used to be no food trucks in Hong Kong except a handful of licenced ice cream vans. Hongkongers prefer air-conditioned eateries, which can be found everywhere, and they do not bother to pay a trip to the inconveniently located food trucks.

In contrast, the numerous food trucks in Britain have constructed a social scene that cannot be found in Hong Kong. I visited a few festivals and fun fairs in which food trucks played a key role in attracting people and providing opportunities of social interaction. Food trucks are not there just to serve the tourists. Tourists find them interesting because they are an established attraction.

Besides cultural preference of eateries, Hong Kong has also developed some special ethics about eating. The provision of snacks and services, a practice widely adopted by pro-establishment candidates for elections, is seen as corrupt. This taboo makes enjoyable social interaction a kind of “original sin,” and respectable politicians are expected—especially by the radicals—to avoid it.

Three points may be drawn from the above. First, food trucks are a result of communal need, without which it is doomed to fail if starting from scratch simply to serve tourists. Second, civil society is not merely a matter of professional bodies and media; it is based on mutually beneficial human relationships. Any protest movements—and their commemorations—will become soulless without community care and normal social interactions, in which eating plays a role. Third, “reviving civic rights for Hongkongers” is by nature a community construction scheme that requires diverse elements, not limited to politics, and impossible to exclude eating. That accused as “human blood dumpling” is exactly an essential element for the construction of a healthy civil society.