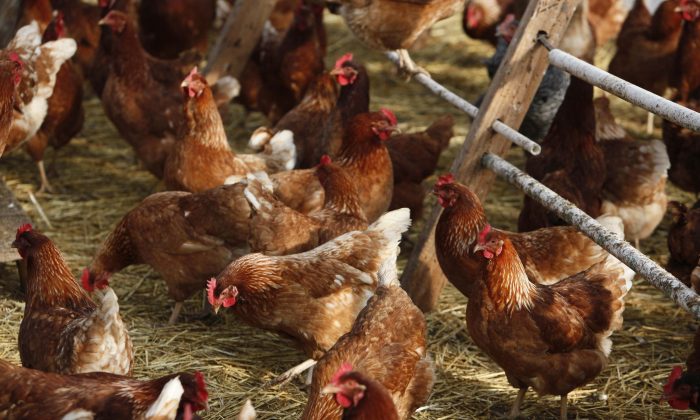 Free range chickens on a farm near Vacaville, Calif. Canadian restaurants aren’t holding out much hope that the Trans-Pacific trade deal will boost the availability of antibiotic-free chicken—something their customers are increasingly craving. (AP Photo/Eric Risberg)
Canada

MONTREAL—Canadian restaurants aren’t holding out much hope that the massive new Pacific Rim trade deal will boost the availability of the antibiotic-free chicken their customers are increasingly craving.

The Trans-Pacific Partnership deal announced Monday will open an additional 2.1 percent of the Canadian chicken market to imports in addition to the 7.5 percent existing threshold. (Two percent of the turkey market, meantime, has been opened up under TPP).

“The change is so small we’re highly doubtful it will be a catalyst for farmers here to be more innovative and more responsive to consumer needs,” said Joyce Reynolds, executive vice-president of Restaurants Canada.

She added Canadians’ love of chicken wings will likely trump any demand on a large scale for antibiotic-free chicken from producers here or abroad.

But Sylvain Charlebois, professor of distribution and food policy at the University of Guelph’s Food Institute, is more optimistic that the new trade deal could spur imports of antibiotic-free chicken and push Canadian suppliers to respond in order to preserve their market share.

“Now, with this opening, they may not have a choice but to actually comply to market demand,” he said in an interview.

“What will encourage more antibiotic-free chicken is consumer demand, and consumer demand is there and it’s coming,” said executive director Mike Dungate.

Antibiotic-free chickens currently account for about three percent of the 1.07 billion kilograms of chicken produced in Canada.

He added that farmers have banned Class 1 antibiotics, and will eventually eliminate two other classes of drugs that affect human health.

Antibiotic-free chickens currently account for about three percent of the 1.07 billion kilograms of chicken produced in Canada, Dungate said.

“The farmers want to produce more chicken than the restaurants, the processors, and further processors want to buy from farmers. There’s not a supply issue. We can produce it and we will.”

Dungate said the TPP will hit the industry hard by removing $54 million in annual revenues, the equivalent of 61 chicken farms. Still, he said, farmers are pleased with the government’s commitment to end “fraudulent import practices.”

Canada is the 17th largest chicken importer in the world, taking in more product than six of the TPP members combined.

The big Canadian appetite for chicken endures as large fast-food restaurant chains like McDonald’s and A&W are making changes in order to respond to the demand for healthier products.

In the U.S., McDonald’s unveiled plans earlier this year to stop using certain categories of antibiotics in chicken production over the next two years. Suppliers will still be able to use ionophores, antibiotics that keep chickens healthy and aren’t used in humans.

However, the fast-food giant’s Canadian subsidiary said it has not made the decision to change its current sourcing practices given Canada’s supply chains are different.

Rival A&W said it only serves chickens raised without antibiotics that are fed a grain-based vegetarian diet.

Neither Swiss Chalet or Quebec chicken chain St-Hubert Rotisserie would comment. However, St-Hubert chairman Jean-Pierre Leger said earlier this year that he’s been trying for more than two decades to get Canadian farmers to adapt. He said the American system of free enterprise with many large producers is more responsive to change than Canada’s “legal cartel.”