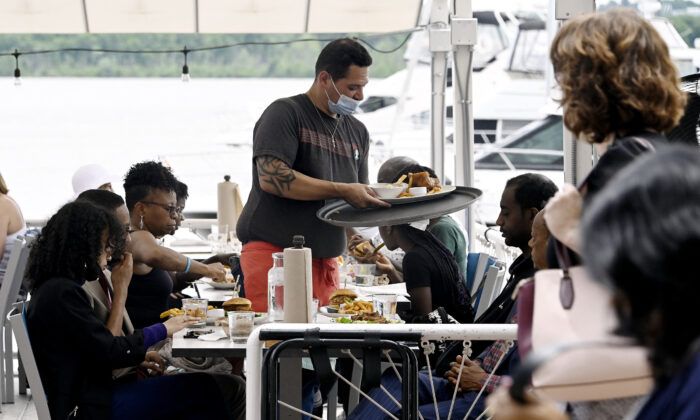 A waiter works at a restaurant in Alexandria, Va., on June 3, 2022. (OLIVIER DOULIERY/AFP via Getty Images)
Economy

Creating a business isn’t a simple feat. Rolling out and maintaining a business that historically carries hefty startup costs and minimal profit margins in a fraying economy marked by high inflation, supply chain disruptions, labor shortages, and elevated fuel costs takes the concept from challenging to another level.

Ben Pote, who opened the fast-casual restaurant Wildacre Rotisserie in June in Greenwich, Connecticut, say there’s never a safe or sane time for a restaurant entrepreneur to set up shop.

“I think you have to be a little bit crazy to open a restaurant no matter what time or what the market conditions are,” he said with a laugh. “Granted, things got a lot more complicated—we’re in the process of reopening the economy and inflation with COVID kind of coming and going, but it’s still a great time for restaurants that are willing to be thoughtful about the way they’re serving their food and are reaching their customers in new creative ways, while managing their costs.”

But not every restaurant owner is able to achieve that sort of balancing act. The industry recorded $799 billion in sales in 2021, down from $864 billion in pre-pandemic 2019, while 90,000 restaurant locations closed either temporarily or permanently because of the pandemic, according to statistics from the National Restaurant Association (NRA).

Federal assistance to the industry during the pandemic was imperfect. While Congress allocated $28.6 billion in March 2021 to the Small Business Administration (SBA) to assist affected restaurants, the Restaurant Revitalization Fund only allocated money to 40 percent of eligible applicants (100,572 businesses) before the funds were depleted. An effort to replenish the fund was defeated in the U.S. Senate in May.

“Restaurants that are still trying to make up for what was lost in the pandemic today are struggling with workforce shortages, record-high inflation, and supply chain constraints,” said Michelle Korsmo, the association’s president and CEO, who complained that the Senate’s action “will further exacerbate those challenges and result in more economic hardships for the families and communities across the country that rely on the restaurant and food service industry.”

And in some markets, restaurants have extra burdens.

“We were one of the states that was hardest hit by COVID pandemic and were shut down longer than some of the other states out there,” said Melissa Fleischut, president and CEO of the New York State Restaurant Association. “I think the struggle to build back in New York has been even harder than in some of the other states where the restrictions probably weren’t as strict on restaurants.

“We have lost some restaurants here that have been longtime members of the community, and that is a very disturbing thing to see whenever it happens.”

Fleischut warned that “the attitude in the industry is becoming more pessimistic than it’s been recently, because there’s no end in sight to the inflation and the increased costs.” She also pointed out that restaurants are struggling with staffing shortages—the NRA estimated the national industry lost 1 million employees between pre-pandemic 2019 and the end of 2021.

“By this point, they’ve probably adjusted to the fact they just aren’t going to be staffed at the same level that they were in early 2020 or even 2019,” Fleischut said. “One of the ways they have adjusted is to cut hours so they’re not open as many days per week.

“Some have cut out lunch and kept dinner, others have cut out maybe Sunday, Monday, or Tuesday, or they’re not operating at the same times that they used to and are probably closing earlier.”

Pote is among the restaurateurs dealing with the labor shortage.

“Pre-pandemic, if you put a hiring post out there, you’d get maybe 30 to 50 applicants, depending on the rate that you’re hiring at the position,” he said.

When he opened Wildacre Rotisserie, “we did not have any kind of meaningful intake of applicants, maybe one or two a day. And of those applicants, we would set up an interview, and with one out of three interviews, the person would not even show up. The inventory of reliable people that were ready to work and eager to work just wasn’t there.”

Pote considered himself “very fortunate in that the people we did hire are great and we have not had a ton of turnover, like a lot of new restaurants.”

Nonetheless, he acknowledged, “we’ve had to allocate the staff that we had to a five-day a week operation because we just weren’t able to staff a fully functioning restaurant seven days a week.”

If there is a bright spot for the restaurant industry, it would be that its customers haven’t disappeared. A recent survey by marketing technology firm Popmenu found that 40 percent of individual or family food budgets in the United States is spent on restaurants each month and 45 percent of Americans eat in restaurant dining rooms at least twice a week.

Matija Zarak, the owner of Dubrovnik Restaurant in New Rochelle, New York, appreciates the continued patronage of longtime customers at his Croatian-focused eatery, even after he had to boost prices to maintain a sliver of profit amid inflation-fueled cost increases.

“We were lucky we were busy,” he said. “We’ve had a couple of very, very busy months. But after school is back in September and things slow down, we will need to get some new ideas in order just to stay in business. Every single day, we are making our plans for the next year.”