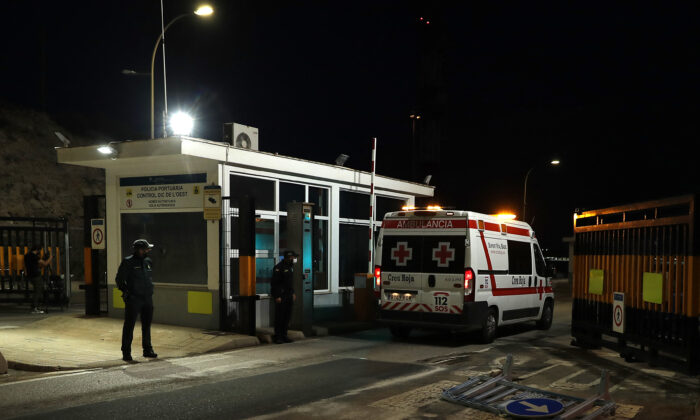 An ambulance enters the port of Palma de Mallorca as Spanish rescuers pulled 14 people to safety, in the sea off the Island of Cabrera, on Mallorca Island on Oct. 4, 2021. (Jaime Reine/AFP via Getty Images)
Europe

MADRID—Spain’s rescue service and the crew of a yacht rescued 14 people off the Spanish Balearic island of Mallorca on Monday while three other people were missing, the government said after it had originally said two people were dead.

Those rescued appeared to be African migrants and were travelling on a rickety boat, said a spokeswoman for the Spanish government’s delegation on the island, who added that no bodies had been recovered.

The rescued people told authorities there were 17 aboard the boat, triggering a search for three other people.

Migrants from North Africa often attempt the dangerous crossing using dinghy boats in search of a better life in Europe.

Sea-borne migration to Spain has surged this year, with more than 27,000 people having made the crossing as of the end of September, up more than 50 percent from the same period last year.

Traffic along the Atlantic route to the Canary Islands accounts for the bulk of the increase, but arrivals to the Balearic Islands have also risen around 20 percent.

By Nathan Allen and Joan Faus