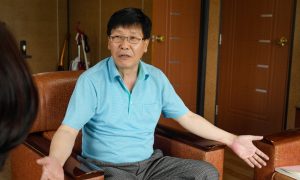 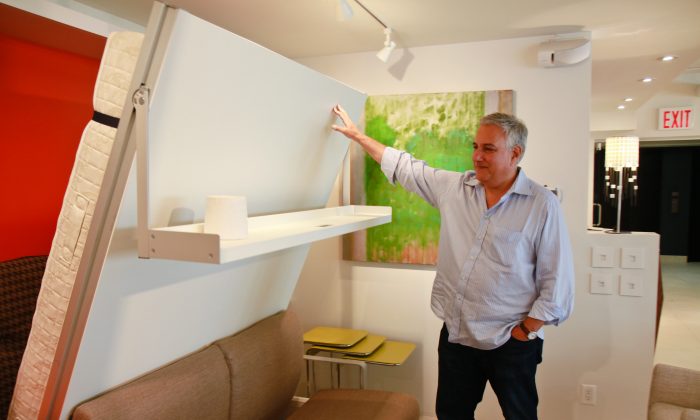 Ron Barth demonstrates a couch and shelf that folds down into a queen-sized bed at his Resource Furniture showroom in Manhattan. (Joshua Philipp/Epoch Times Staff)
China

NEW YORK—Ron Barth hits play on an online video, and to a techno-disco beat a Chinese man is shown transforming shelves into beds, a wall rotates to reveal a flip-down queen-sized mattress, desks turn into tables.

For the uninformed consumer, the video presents an affordable cascade of space-saving furniture. For Barth, it’s a counterfeit market that’s difficult to compete against, and a slave economy that is rapidly marching on the West.

“These are knocked-off products from China,” Barth says, looking at the furniture made to look like his own. “They copied everything.”

Resource Furniture, the company he co-founded with his business partner, Steve Spett, started from humble beginnings, yet grew to international acclaim after a video of their unique furniture went viral. Resource Furniture is now the largest space-saving furniture company in the United States.

Yet the fame also brought some unwanted attention. A friend sent him a link to an online store selling knock-off versions of his products, and he already found a shop in Canada that was selling the counterfeit furniture. Barth says “he was trying to sell them out of his house.”

For Barth, the concern is less about the illicit shops, and more about what is behind them. His company imports very high quality products that are finished one piece at a time with exceptional care. Chinese counterfeits often show signs of lower quality production.

“All those specific individualized finishes and the quality of the specialized hardware with no compromises or short-cuts; that’s something a smaller scale business like us can’t do out of China. The level of quality control and oversight just isn’t possible for us to do.” he says. “You need to buy a high volume of container loads. But still that is not what we want to do even if it were manageable.”

He believes in caring for his employees and supports business that maintains a decent way of life. His manufacturers at the furniture company Clei in Italy are well off, with steady incomes and lives outside their jobs.

Resource Furniture and the Italian factory hire people who do the work as a trade—designers whose craft is their art. And while he’s aware he could make more profit mass producing in China, he refuses to do business with a country where manufacturing and crimes against humanity can be one and the same.

“I think it’s a slave labor society,” Barth says. “I don’t care if I could make more money participating in it. I have to sleep at night.”

When globalization gives economies with slave labor wide access to markets around the world, the slave-labor economies drive down the quality of life elsewhere.

“The U.S. manufacturing wages are fairly high, but the wages have actually gone down in this country because of foreign competition,” says Daniel Katz, an expert on the effects of outsourcing manufacturing.

The question then comes down to quality and competition. At the Foxconn factory in China, which used to manufacture Apple products, workers are expected to put in 12-hour days, 6 days a week, and live in on-site dorms.

Katz says “that would never hold up in the U.S.—that kind of living—because we actually have proper labor laws.”

Still, there is room for companies to manufacture in America and still make a good profit, but this comes with a bit of sacrifice.

“A lot of it has to do with shareholders and board members, because to them profits are everything,” Katz says. He noted that when a company goes public, it is often pressured to save costs and raise profit, “and the easiest way to do that is to outsource, because you cut the wages down.”

Power of the Dollar

To Barth, work is about more than just making money. To him, it’s a way to preserve a way of life, and it’s something that determines the quality of life for others. He says as a business owner, it’s important to “look beyond your own survival” and understand you have “some responsibility to other people.”

When he goes to visit his manufacturers in Italy, “They’re happy to see me, and I go to their house for dinner,” he says. “Their suppliers are healthy, they’re healthy, and all the people who work for them are making real money.”

Rather than compete head-on with the cheap products that saturate the furniture market, he instead decided to focus on high-end products. He says “you can’t compete against the low-end,” because “they’re buying in a quantity that’s impossible to deal with, and they’re making a quality that’s the least common denominator.”

For quality, he makes sure the products are solid and gives lifetime warranties with free repairs. Their furniture is also CARB 2 compliant, which means his furniture is free of formaldehyde that, in part, causes the “new furniture smell.”

“It isn’t how we would want to be treated, so we don’t treat the customer that way,” he says.

He says his biggest hurdle, as with most companies, is the cost of products and shipments. He believes that he could sell 10-times more products if he were to outsource to China. Yet out of care for the well-being of others, he has resisted the temptation of Chinese manufacturing.