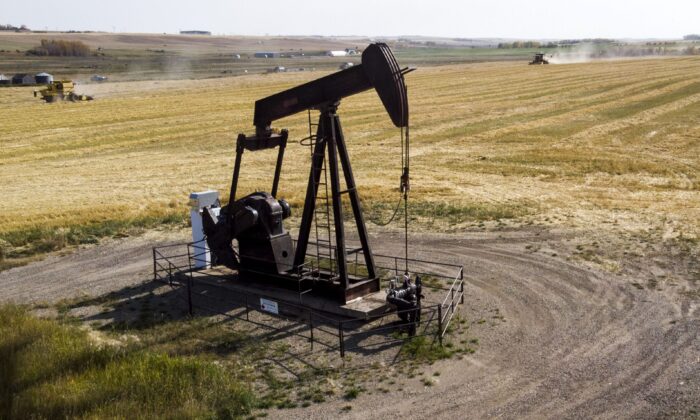 An oil and gas pumpjack operates in a wheat field near Cremona, Alta., on Oct. 1, 2020. (The Canadian Press/Jeff McIntosh)
Investment

Actions taken to counter the ESG movement are broadening as the biggest money managers in the world are being taken to task for pushing their political and ideological stances on companies. Some observers of the progressive investment phenomenon see it as a threat to democracy and national security and a violation of capitalism.

As an example, popular Canadian money manager Wealthsimple offers to tailor SRI portfolios for clients by avoiding investments in oil or weapons companies, eliminating the top 25 percent of carbon-emitters in each industry, and ensuring that every stock in the portfolio has 25 percent women or at least three women on the company’s board of directors.

A key critique, says Wilfrid Laurier University professor and financial economist William McNally, is that by adhering to ESG, companies are determining public policy and not representing the broader will of the electorate.

“It’s terrible for the average Canadian citizen,” he told The Epoch Times.

“If you have the top Wall Street banks that collude to say: ‘We’re not going to finance a gun manufacturer, we’re not going to finance a company involved in border security,’ they have enough power where they’re effectively altering the policy of the country. And that is not a healthy thing. That is changing policy outside the normal constitutional process,” he said.

“And so I think it’s healthier for society to have businesses focusing on doing their core missions but not leveraging their economic power to try to advance a partisan political agenda.”

A lightning rod for the ESG’s criticism is BlackRock and its chairman and CEO Larry Fink, who in his 2022 letter to CEOs said, “Stakeholder capitalism is not about politics. It is not a social or ideological agenda. It is not ‘woke.’”

“ESG is just stakeholder capitalism warmed over with a new name,” he said. “He’s forcing his political agenda on the companies that he [BlackRock] is investing in.”

A basic tenet of finance is that a CEO runs a company to maximize value for its shareholders—the owners of the firm.

“The stakeholder capitalism idea is that, ‘No, the company shouldn’t be run for the sole interests of the shareholders. We need to balance all of the stakeholder groups against each other and sort of maximize their collective welfare.’ But the problem is, that’s just not operational because so often their interests are in conflict,” McNally said.

He adds that this is “really undemocratic” and dovetails with what Nobel Prize-winning economist Milton Friedman wrote in a New York Times editorial in 1970.

Friedman stated that the actual social responsibility of business is to increase its profits, and when business leaders deviate and start focusing on achieving certain social objectives, “they are—or would be if they or any one else took them seriously—preaching pure and unadulterated socialism.”

Vivek Ramaswamy, founder of Strive, previously told The Epoch Times that the push for ESG standards in the private sector is the “single greatest threat” to democracy and capitalism in the United States.

He blamed the biggest investment firms BlackRock, Vanguard, and State Street for buying shares on behalf of everyday citizens and then telling those companies that they have to adopt certain social or environmental agendas otherwise the management will be fired or have its pay cut.

McNally noted that the trust structure of mutual funds, ETFs, and pension funds gives the stock voting rights for various proposals at shareholder meetings to the fund manager.

“All these voting rights getting concentrated into this elite group—that’s not healthy,” he said, adding that exiting an investment is one way of signalling discontent with a company’s direction.

“When you start hearing the management talking all about ESG instead of about how they’re running their business, yeah, I’d be selling that.”

Constrained Capital said: “Many ‘ESG’ funds own some of the worst ESG contributors. Risks are soaring as investors say one thing and do another with respect to ESG. Worse yet, vital industries are being starved of funds, exacerbating global imbalances and heightening security risks.”

“ESG is at an inflection point,” CIBC World Markets head of portfolio strategy Ian De Verteuil told BNN Bloomberg on Aug. 12. “This year, it looks as if actually we’ll have no net inflow. We might have negative … outflow [from] ESG-oriented funds,” he added.

De Verteuil said ESG investors may be surprised to learn they own twice as much Russian oil and gas stocks as they do Canadian.

What might also come as a surprise to ESG investors is that two BlackRock iShares ESG exchange-traded funds (ETFs), ESGU and XVV, have the same top five holdings as the Nasdaq 100 QQQ ETF—Apple, Microsoft, Amazon, Tesla, and Alphabet (Google).

“That’s part of the reason for the rise in the anti-ESG movement,” said Tariq Fancy, the ex-CIO for sustainable investing at BlackRock, in an Aug. 15 interview with CNBC.

He said ESG investors are paying more in fees for “really the same thing with green paint on top.”

Canadian securities regulators published guidance in January regarding ESG, taking aim at “greenwashing,” where a fund’s disclosures end up misleading investors about the ESG-related aspects of the fund.

“The impetus to paint the thing green to get a fee bump on a commoditized product is huge,” Fancy said.

ESG funds charge higher fees than more standard baskets of stocks—averaging 0.2 percent as compared to 0.14 percent respectively at the end of 2020, according to CNBC citing data from FactSet, published by The Wall Street Journal.

As lobby groups like Canada’s Shift advocate pension funds to reconsider investing in the energy sector, McNally argues that ESG metrics are “flawed” and green-energy lobbyists are “not looking at the broader costs and benefits of the policy and the implications of the policy.”

McNally provides the example of a firm with an offshore supply chain that would likely report a lower carbon footprint since it is not measured like it would be in Canada or the United States.

“Until we have global measurement that really creates some unfair comparisons, … I don’t even know what to make of the governance scores.”

Ian Madsen, a senior policy analyst at the Frontier Centre for Public Policy, said that ESG scoring, which has become a mess, leads to less investment, the misallocation of capital, and lower returns.

“Nearly every firm working in China uses electricity generated by coal. Hence, they should have a low E score and not be investible by Western devotees of ESG standards. But they are still eligible,” he wrote in an Aug. 23 Troy Media opinion piece.

Voting With Their Dollars

Assets in ESG funds both in the United States and Canada have been rapidly growing in recent years, but the second quarter of 2022 saw a rare drop in total assets among Canadian-domiciled funds in the Global Sustainable Funds Universe, based on data provided to The Epoch Times from Morningstar Direct. The United States saw its second-straight quarterly drop in such assets and even net outflows during the second quarter.

Morningstar reported on July 28 that global sustainable fund assets slipped to US$2.47 trillion, but that the 13.3 percent quarterly fall in the second quarter of 2022 was less than the 14.6 percent decline in assets for the broader market.