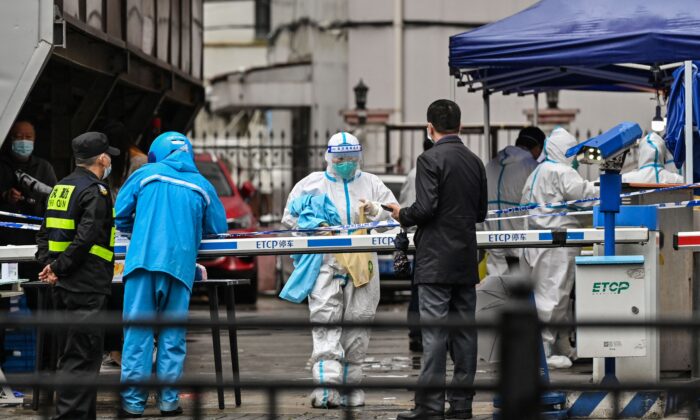 A delivery man (L in blue) is seen arriving to deliver an order outside of a locked down neighbourhood after the detection of new cases of Covid-19 in Huangpu district, in Shanghai on March 17, 2022. (Hector Retamal/AFP via Getty Images)
INSIDE CHINA

The COVID-19 outbreak is worsening in mainland China and the reported number of cases continues to rise. The daily infection numbers in Shanghai continue to set new records. Some local residents said many areas of Shanghai is in a lockdown, and real infection numbers could be several times more than the official reports.

On March 23, the Chinese communist regime reported a total of 4,937 COVID-19 new infections in mainland China. Among them, the number in Shanghai hit new heights again, with 981 reported local cases, 977 asymptomatic.

Many communities in Shanghai have been locked down, and general hospitals were temporarily changed to hospitals designated for COVID-19 patients, accepting only critically ill patients, while major hospitals in the cities suspended medical services due to the worsening outbreak.

Since March 22, a post of “Shanghai will be locked down for 7 days” was circulated widely on Chinese social media, making residents even more anxious. Many residents rushed to major supermarkets to buy food and supplies, emptying store shelves, during the hours they were allowed to leave their closed-off residential communities to get food.

On March 23, the Shanghai Public Security Bureau denied the reports, calling it fake news. The police said they have started investigating people who disseminated such news.

However, some local residents told the Chinese language edition of The Epoch Times that many areas in Shanghai have been closed off.

On March 22, a post stating that more than 8,000 cases were diagnosed in Beicai area of Pudong district in Shanghai on March 21 appeared on Chinese social media. The official Weibo account of the Shanghai Municipal Government Information Office responded quickly saying that this was false news.

A staff member of a textile company in Shanghai told The Epoch Times on March 23 that the reports of more than 8,000 cases found in Beicai Pudong were true.

The staff member cited a colleague of her husband who works at the police station. He said the officials have been reporting the 8,000 cases separately in batches, reporting 800 to 900 cases every day, according to the staff member.

A resident surnamed Zhu in Jing’an District, Shanghai told The Epoch Times on March 23 that the pandemic in Shanghai is indeed severe. Now, Minhang District Sports Park and Jiading District Gymnasium are converted into mobile cabin hospitals, isolating asymptomatic infections and mild patients. As for the isolation conditions, she said it’s a bit like a “concentration camp.”

Another resident in Shanghai surnamed Li said that her colleague was in Jiading District, where the lockdown had just been lifted, and is now closed off again because a lot of asymptomatic infections were found there. Many hotels in Shanghai have been requisitioned to became quarantine sites.

Li said that all work places in Shanghai now encourage people to work from home. Some companies still require employees to work in person, but they need get approval, have their entry and exit passes stamped by their community offices, and have a 48-hour nucleic acid test certificate in order to leave home for work.

According to mainland Chinese media reports, on March 22, the mayor of Shanghai held a “discussion” session with the Fifth Inspection Team of the State Council of the Chinese regime sent to inspect the pandemic control in Shanghai.

A Shanghai citizen surnamed Zheng told the Epoch Times on March 22 that the inspection team coming to Shanghai means that the central government was dissatisfied with the handling of the pandemic in Shanghai, but it could do little now.

Zheng said that although Shanghai does not officially say that the city is locked down, in fact, it is no different from being under lockdown. People from other areas dare not enter Shanghai and Shanghai residents also dare not leave Shanghai, due to the pandemic.

Another resident surnamed Ren told The Epoch Times on March 23 that the lockdowns in Shanghai were unnecessary. In his community, no confirmed cases were found, but the community is closed for five days. People cannot go to work or seek medical treatment, which is causing them a lot of  inconvenience. “My sister is critically ill and I want to see her, but they won’t let me go out,” he said.

“Many hospitals in Shanghai have also been closed, such as Xinhua Hospital. When the pandemic is severe, should hospitals that treat the sick and save people be shut down?” he asked.

Fang Xiao, Gu Xiaohua, Luo Ya and Hong Ning contributed to the report.