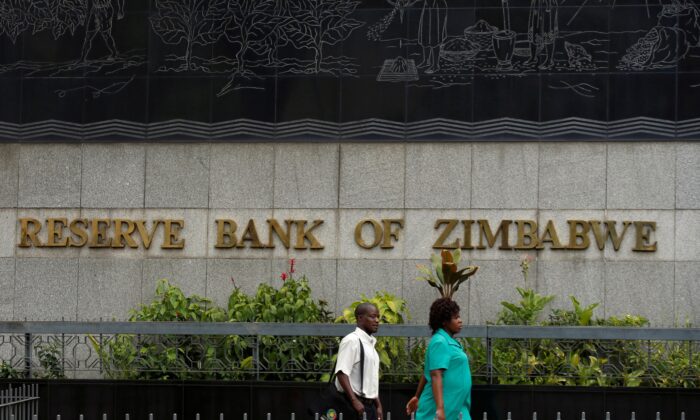 People walk past the Reserve Bank of Zimbabwe in Harare on Feb. 25, 2019. (Philimon Bulawayo/Reuters)
Africa

The government of Zimbabwe has announced that it will issue gold coins in July, a move that is being viewed with skepticism by many local currency traders.

The gold coin, which will be called “Mosi-Oa-Tunya,” will weigh one troy ounce and have a purity of 22 carats, the Reserve Bank of Zimbabwe said in a July 4 press release. Every coin will have a serial number and can be used as collateral security for loans and credit facilities.

Coins will be available for sale to the public beginning July 25 in local Zimbabwean dollars (ZWD) as well as U.S. dollars (USD) and other foreign currencies at a price based on the cost of production and the prevailing international price of gold.

“The coins will be sold through the Bank and its subsidiaries, Fidelity Gold Refinery (Private) Limited and Aurex (Private) Limited, local banks, and selected international banking partners. Entities selling the coins shall be required to apply Know Your Customer (KYC) principles,” the statement said.

Speaking to The Guardian, Munesu Mandiopera, a foreign currency trader, called the government decision a “failed move.” He pointed out that gold is expensive. Many Zimbabwe citizens won’t be able to buy the coins and will continue keeping their money at home, he added.

“I cannot trust the central bank to give me a coin while they hold my cash,” Evans Mupachikwa, another foreign currency trader, said. “Zimbabwe is known for policy inconsistencies. What if they wake up and say the coins are no longer tradable?”

In June, Zimbabwe’s inflation hit 191.6 percent. In response, the central bank raised its main interest rate from 80 to 200 percent per year to deal with the rising cost of living. Zimbabwe has also outlined plans to make the U.S. dollar the country’s legal tender for a period of five years to boost confidence.

According to IH Securities, a brokerage based in Harare, Zimbabwe, the sale of gold coins can boost investor confidence in the Zimbabwean dollar. “This would distinguish the gold coin market from the government paper market or money market,” the company said in an emailed note to clients, according to Bloomberg.

In addition, the central bank will be able to “mop up considerable levels” of excess Zimbabwean dollar liquidity by selling the gold coins, the brokerage added.