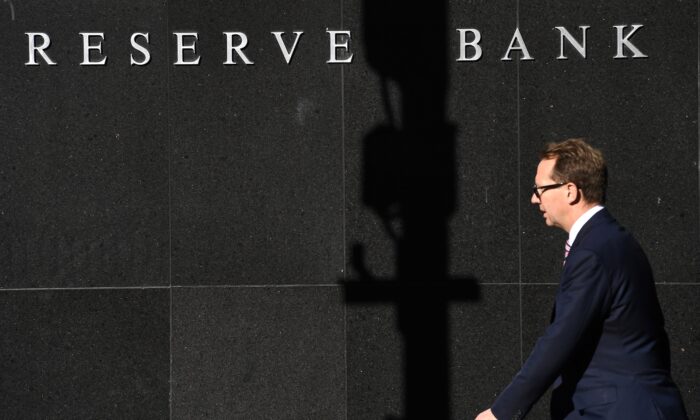 A man walks past the Reserve Bank of Australia sign in Sydney, Australia, on Sep. 6, 2016. (William West/AFP via Getty Images)
Australia

The Reserve Bank of Australia (RBA) needs more monetary experts on its board as part of a much needed structural reform, the chief economist at the Centre of Independent Studies said.

Peter Tulip, who previously worked at the RBA, noted that while many media reports have suggested an external RBA review to focus on the bank’s inflation target, it was not the main issue.

“The answer is that there is too much reliance on one fallible individual: the Governor. The RBA needs better processes to identify and correct any mistakes he might make,” Tulip said in a paper.

The RBA had been persistently unable to meet its two to three percent inflation target for around five years, before the recent surge to 5.1 percent.

Tulip said these consistent failures were “expected, not accidental” since most of the central bank’s board members are not monetary experts.

“[RBA board members] can ask good questions, but they are unable to effectively challenge the Governor,” he said.

Tulip also noted that greater transparency with the public for its decisions would force more accountability on the bank, lessening the likelihood for mistakes.

“The RBA would make fewer and less persistent mistakes if it was required to explain its decisions in public,” he said. “We should have higher standards for monetary policy, given that it affects millions of households and that the RBA has a large staff to do the drafting.”

The Organisation for Economic Cooperation and Development (OECD) said in September 2021 that it was an “appropriate time” for a review of Australia’s monetary policy framework.

“Legacies of the pandemic in the form of higher public debt and limited monetary policy space will present challenges for macroeconomic management going forward,” it noted (pdf).

Both major parties are also in favour of conducting an independent external review of the RBA, which would be the first review of the entity since 1981.

Shadow Treasurer Jim Chalmers previously told the National Press Club that if Labor won the election that it would be a well-timed opportunity to conduct a review into the RBA’s work towards the inflation target and other aspects.

“Since we had the last review of the Reserve Bank … We’ve had two sets of difficult times, we’ve had extraordinary monetary policy,” he told reporters on April 5. “And we’ve had this big question which never seems to be sufficiently answered in a thoughtful, considered way, about the interaction of fiscal and monetary policy.”

Treasurer Josh Frydenberg is also committed to an independent review of the RBA and its monetary policy after the elections.

The RBA is currently under pressure to increase the cash rate in response to surging inflation, regardless of the upcoming election.

“Moving both during the election campaign and then again immediately after the federal election … may well take some of the politics out of this impending tightening cycle,” RBC Capital Markets chief economist Su-Lin Ong said.