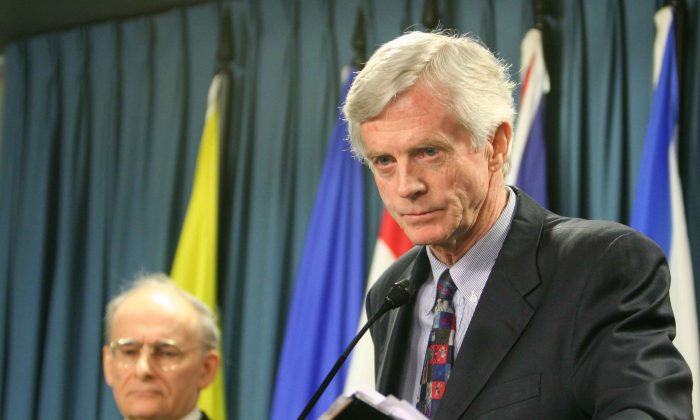 LOS ANGELES—As former Canadian member of Parliament and Secretary of State (Asia-Pacific) David Kilgour travels around the world speaking on the issue of forced organ harvesting from prisoners of conscience in China, there are some people who tell him the practice ended in 2015.

Jan. 1, 2015 is the date that former Chinese Vice Minister of Health, Huang Jiefu, openly promised that China would end using organs from executed prisoners for transplantation.

“People don’t want to believe this is still going on. They want to believe that it’s stopped,” he said during an interview at the Epoch Times Los Angeles office on Friday, Feb. 3, prior to a screening of the award-winning documentary “Human Harvest” at the UCLA Ackerman Grand Ballroom.

For years, Kilgour has researched allegations of organ harvesting in China. In June of last year, he published an updated version of his 2006 report titled “Bloody Harvest,” co-authored by international human rights lawyer David Matas, and in cooperation with researcher and author of “The Slaughter” Ethan Gutmann.

The researchers say China is conducting 60,000 to 100,000 organ transplants per year, and most of the organs come from Falun Gong practitioners and other prisoners of conscience who are killed in the process.

Meanwhile, Chinese officials claim only 10,000 transplants are conducted each year.

Yet Kilgour said most of the data used in his updated report came directly from Chinese government websites during the last two years. And the number of transplants was much higher than 10,000.

All the evidence points to a giant bank of living organ “donors,” who are tissue matched to wealthy Chinese and medical tourists and killed on demand, said Kilgour. The film “Human Harvest” by Vancouver filmmaker Leon Lee tells the chilling story in detail.

“People will fly to China and get a kidney or a liver and come back home with it, and they don’t want to think about where the liver’s coming from,” he said. “That is simply inhuman, and it’s got to stop.”

Kilgour says he has found hope in an unlikely source—the administration of U.S. President Donald Trump.

Late last year, Trump picked Peter Navarro to head a new National Trade Council. Navarro has written hard-hitting books and created a film about the risks the United States and the rest of the world face from China regarding issues such as trade imbalance and the military.

Kilgour thinks highly of Navarro and even wrote an endorsement for Navarro’s book “Crouching Tiger: What China’s Militarism Means for the World,” calling it “brilliant and clear-headed analysis.”

“I think big changes are coming for the way China deals with America, and I think with the world, for the better,” said Kilgour.

Although Kilgour is not a supporter of Trump, he thinks it’s likely the new U.S. president will be tougher on China than the previous administration and may put pressure on the Chinese regime to take responsibility for the crime of organ harvesting.

Kilgour said during his travels, he’s noticed more and more people around the world are becoming aware of the organ harvesting issue. His recent visits to Ukraine, Latvia, and Poland were covered extensively by local media.

He said he’s also optimistic that the horrific practice of organ harvesting in China will soon end, despite the fact that it could be generating as much as $9 billion a year.

“Once more and more people in China know about it, I’m sure they’ll rise for the party state to stop doing it,” he said.

Until that happens, he hopes the United States, Canada, and other countries can join Israel, Spain, and Taiwan in passing legislation banning citizens from participating in transplant tourism to countries that sell organs that were taken by force.

“The question now is doing something about it,” said Kilgour.