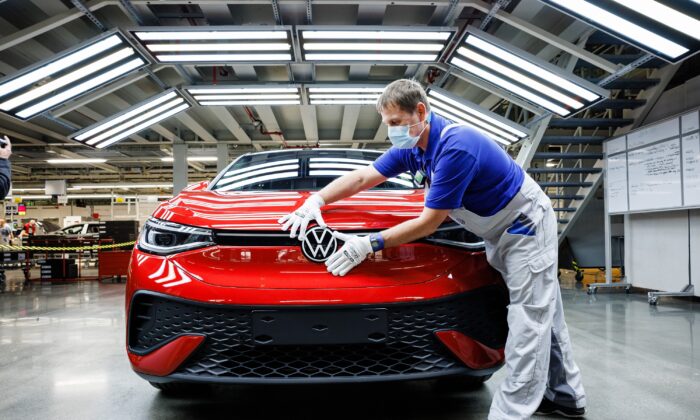 Research: Tesla Could Be Overtaken by Volkswagen as Top EV Maker by 2024

Germany’s Volkswagen Group could grab the top electric vehicle (EV) maker crown from Tesla Inc., according to a research report by Bloomberg Intelligence.

“Tesla’s new EU capacity and buoyant global demand should enable it to retain its sales crown for at least another year, though Volkswagen is hot on its heels and could overtake in 2024,” the report said.

“Execution will be key to encroaching on Tesla’s $750 billion market capitalization.”

Tesla opened its first European manufacturing plant Giga Berlin in March this year. The factory can produce 500,000 electric vehicles a year when it is ramped up to full capacity.

The report assumes Tesla’s Cybertruck launch next year will be further delayed and estimates Volkswagen will grow its electric vehicle share on the back of 16 new models including the Audi Q6, A4 e-tron, A6 e-tron, ID 5/6, ID Buzz, and Porsche Macan.

“This comes as part of a goal to achieve a 25 percent BEV sales mix by 2025–26. These will better compete on range and technology, widening the volume gap vs. legacy peers,” the report said, adding that the German automaker would be able to use its global scale to achieve the top end of its new 8–9 percent 2025 Ebit-margin target early, ahead of consensus.