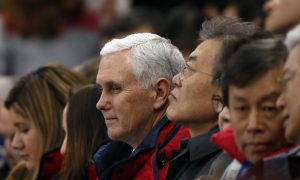 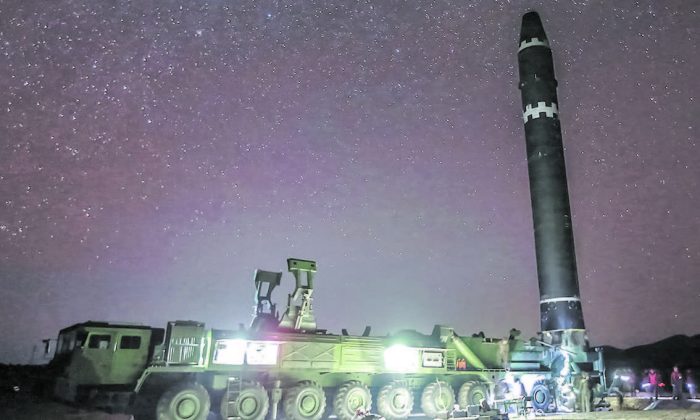 A Hwaseong-15 missile, which North Korea claims is capable of reaching all parts of the United States, on Nov. 26, 2016. (KCNA VIA KNS/AFP/GETTY IMAGES)
International

The North Korean communist regime may have had outside help in advancing its nuclear weapons program, according to a new report from Jane’s by IHS Markit, a defense intelligence company.

It notes, according to a press release, “North Korea has made use of external knowledge, technology or hardware in its ballistic missile programme.”

The analysis focuses on North Korea’s Hwaseong-15 intercontinental ballistic missile (ICBM), which was launched in November 2017. North Korean media declared the missile was capable of striking any part of the U.S. mainland.

According to the release, the North Korean regime allegedly made significant progress on its nuclear weapons programs within a very short timeframe. It refers to these as “unprecedented advances,” and notes that North Korea claims it displayed four of the missiles during its Feb. 8 military parade in Pyongyang.

It is highly likely that North Korea made use of foreign knowledge, technology or hardware in the development of the Hwaseong-15 ICBM.
— From a press release by defense intelligence company Jane’s

This was unlikely accomplished without outside help. The Jane’s press release states, “it is highly likely that North Korea made use of foreign knowledge, technology or hardware in the development of the Hwaseong-15 ICBM.”

The report notes, “Given the limited time and test resource available to North Korea, it is highly unlikely that North Korea could design, develop, engine test and integrate the components into … intercontinental missile systems without external assistance.”

A breakdown of the missile shows it contains Soviet-era Russian technology and uses a modified Chinese mobile launcher.

Jane’s suggests it’s possible there was a technology transfer that allowed North Korea to build the weapons. It adds, however, that since some of the technology could be obtained through open source methods, it cannot be confirmed whether North Korea had direct assistance.

“North Korea could have acquired information about them from a range of sources, including some available online,” said Neil Ashdown, deputy editor of Jane’s Intelligence Review, in the release.

“Even if North Korea did acquire hardware relating to these systems, we cannot say with any confidence where that would have come from, and more importantly when. That does not mean a transfer did not take place—just that we cannot prove that based on the information we have,” Ashdown said.

An important piece of information, the release states, is that the Hwaseong-15 missile had not been seen publicly before its launch in November 2017; and that “it differs from previously observed North Korean missiles.”

It also notes that the new missile uses a higher-energy liquid propellant engine, and North Korea has done little public testing of such systems.