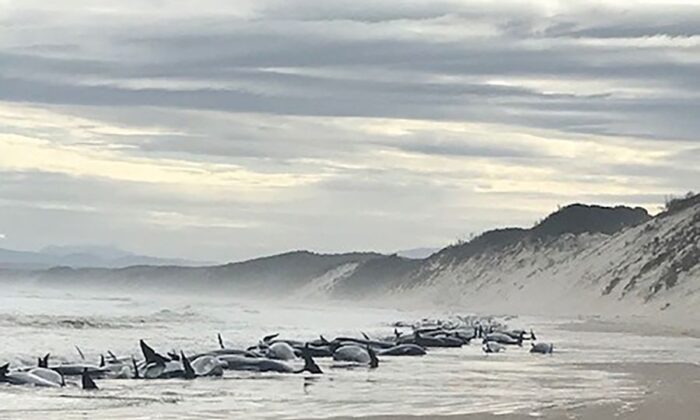 Rescuers Save 32 Whales From Mass Stranding in Tasmania

Rescuers have managed to return to the ocean 32 beached pilot whales that survived a mass stranding of their 230 strong pod on Tasmania’s West Coast.

The 32 of the 35 surviving whales were refloated on Thursday in what rescuers described as a “terrific result.”

Most of the 230 pilot whales died after becoming stranded on Ocean Beach near Macquarie Harbour, south of Strahan, on Wednesday.

Of the 32 whales that were refloated on Thursday, two had to be rescued a second time because they became stranded again.

The final three surviving whales will be refloated on Friday.

“Because of access restrictions … we just haven’t been able to access those three animals safely today, but they’ll be our priority in the morning,” incident controller Brendon Clark told reporters on Thursday afternoon.

The 50-person rescue team used a mechanical aid to lift the animals out of the dry sand and back into the water.

Clark said the new refloating technique was a “roaring success.”

“The crews out on the ground basically said that we wouldn’t have been able to have the success and the achievement that we had today without it,” he said.

“It will certainly be a strategy and methodology that we use going forward.”

Post-mortem investigations were already underway for the nearly 200 whales that died in the mass stranding.

“That’s more about ruling things out, any potential disease or health issues that may have caused animals to strand.

“We’re not expecting to find anything like that. These mass-stranding events are typically the result of an accidental coming to shore.”

Planning for the removal and disposal of carcasses is underway.

“Our first option will be long-lining the carcasses out to the deep ocean,” Clark said.

“At the moment, the applicable weather conditions look like being Sunday, so we’re looking at that window of opportunity to get them out as far away as we can from the coast.”

The stranding is the second in a matter of days after 14 dead sperm whales washed ashore at King Island in South Australia on Monday.

Changes in weather and water temperatures have been cited as possible causes.

The incident near Macquarie Harbour comes two years after the worst whale stranding in the nation’s history occurred in the same location.

About 470 pilot whales were found beached at Macquarie Harbour, and the vast majority died.

There have previously been reports of strandings involving sperm whales and dolphins in the same location.