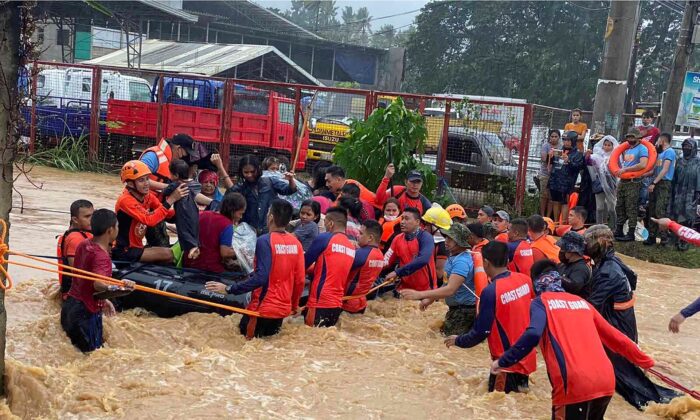 MANILA, Philippines—A powerful typhoon slammed into the southeastern Philippines on Thursday, toppling trees, ripping tin roofs, and knocking down power as it blew across island provinces where nearly 100,000 people have been evacuated.

Coast guard personnel were rescuing residents stranded by chest-deep waters in a southern province, where pounding rains swamped villages in brownish water. In southern Cagayan de Oro city, footage showed two rescuers struggling to keep a month-old baby inside a laundry basin above the waters and shielded from the wind and rain with an umbrella.

Forecasters said Typhoon Rai further strengthened with sustained winds of 195 kilometers (121 miles) per hour and gusts of up to 270 kph (168 mph) as it blew from the Pacific Ocean into the Siargao Islands. There were no immediate reports of casualties or major damage.

“I’m scared and praying here in my house that this stops now. The wind outside is so strong it’s cutting down trees,” Teresa Lozano, a resident of eastern MacArthur town in coastal Leyte province, told DZMM radio by telephone, adding roofs of nearby houses were damaged and that her farming village had lost power.

Disaster-response officials said about 10,000 villages lie in the projected path of the typhoon, which has a 400-kilometer (248-mile)-wide rain band and is one of the strongest to hit the country this year.

The coast guard said it has grounded all vessels, stranding nearly 4,000 passengers and ferry and cargo ship workers in dozens of southern and central ports. Several mostly domestic flights have been canceled and schools and workplaces were shut in the most vulnerable areas.

More than 98,000 people have been evacuated to safety, the government’s disaster-response agency said. Crowding in evacuation centers was complicating efforts to keep people safely distanced after authorities detected the country’s first infections caused by the omicron variant of the coronavirus. Intensified vaccinations were also halted in provinces likely to experience stormy weather.

The Philippines is among the hardest-hit in Southeast Asia by the pandemic, with confirmed infections of more than 2.8 million and more than 50,000 deaths. Quarantine restrictions have been eased and more businesses have been allowed to reopen in recent weeks after an intensified vaccination campaign. The detection of the omicron cases this week, however, has set off the alarm and the government renewed calls for people to avoid crowds.

Gov. Ben Evardone of Eastern Samar province said he suspended vaccinations in his region of nearly half a million people due to the typhoon.

Overcrowding is unavoidable, he said, in the limited number of evacuation centers in his province, where more than 32,000 people have been moved to safety.

“It’s impossible to observe social distancing, it will really be tough,” Evardone told The Associated Press. “What we do is we cluster evacuees by families. We don’t mix different people in the same place as a precaution.”

About 20 storms and typhoons batter the Philippines each year. The archipelago is also located in the seismically active Pacific “Ring of Fire” region, making it one of the most disaster-prone countries in the world.