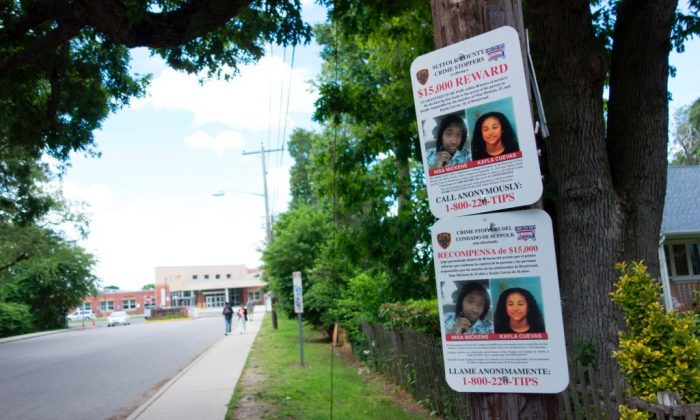 A reward poster on a telephone pole near the local high school, asking for help in finding the killers of Nisa Mickens and Kayl Cuevas June 7, 2017, in Brentwood, N.Y. (Don Emmert/AFP/Getty Images)
Crime and Incidents

Three defendants who are allegedly part of the notorious MS-13 gang showed no remorse on Tuesday as they laughed and smiled in a New York courtroom.

Meanwhile, the family of one of their alleged murder victims glared at the defendants—Enrique Portillo and brothers Alexi Saenz and Jairo Saenz.

Prosecutors are waiting to hear if the Justice Department will allow them to pursue the death penalty for the trio for the murders of best friends Nisa Mickens and Kayla Cuevas in Brentwood in 2016.

The arsenal included a loaded 9mm semi-automatic handgun, numerous rounds of ammunition, including additional 9mm, .38 caliber, .357 caliber, and other assorted rounds, machetes, a sword, a hatchet, and knives, according to the Department of Justice.

The Saenz brothers, Portillo, and 10 other defendants were charged with seven murders in total, including those of Mickens and Cuevas.

Authorities said in the indictment against the trio that they brutally killed the teenagers using baseball bats and machetes.

The New York Post said that Cuevas’s family attended the hearing this week in Central Islip, “glaring daggers at their daughter’s alleged murderers from the front pew.”

Evelyn Rodriguez, the mother of 16-year-old Kayla Cuevas, and other family members of the girls attended the State of the Union as guests and President Donald Trump mentioned the two murdered girls during his speech.

“I did shed a tear after everyone sat down,” Robert Mickens, the father of 15-year-old Nisa Mickens, told Newsday after the event.

“I was trying to absorb the memory,” he said. “There was a lot of great energy flowing throughout the room. I just wanted to take in the energy and love that was there.”

Trump said in his speech that everyone in the audience was praying for the families of the “precious girls.”

“Tonight, everyone in this chamber is praying for you. Everyone in America is grieving for you. And 320 million hearts are breaking for you. We cannot imagine the depth of your sorrow, but we can make sure that other families never have to endure this pain,” he said.

Authorities said that the MS-13 gang has become increasingly brazen in its attacks, and have vowed a crackdown on members.

The transnational street gang is believed to be responsible for more than 30 murders across Long Island since 2016.