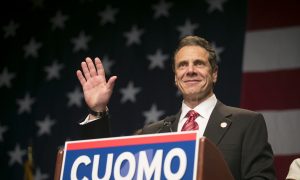 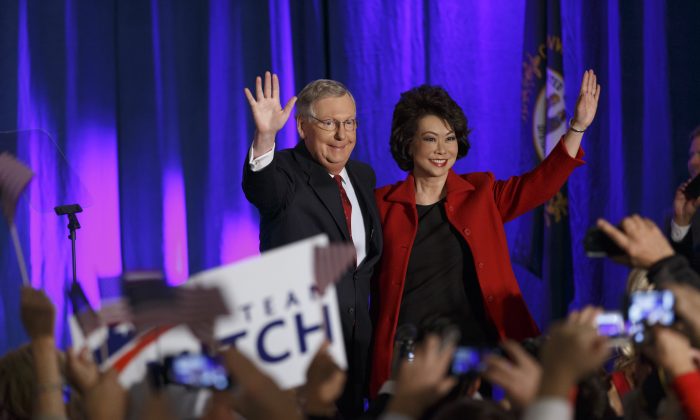 As of 11:30 p.m., the Republicans had picked up six Senate seats, assuring them control of the upper chamber. With Republicans having a good chance to score pick ups in any one of 3 other states, their tally in the Senate is likely to grow.

In the first big news on election night, Republican Senate leader Mitch McConnell, dispatched his Democratic challenger Alison Grimes in Kentucky. A few weeks ago polls showed this race to be tight, but in the end McConnell won pulling away.

Voters are “hungry for new leadership. They want a reason to be hopeful,” said the man in line to become majority leader and set the Senate agenda if his party gains control.

Soon after, other Republicans made breakthroughs. Republican Tim Scott of South Carolina became the first black senator elected in the Deep South since Reconstruction. Republican Governor Nikki Haley appointed him in 2013, and he won reelection. Scott’s South Carolina colleague Lindsey Graham won his third term in the Senate.

In traditionally Democratic Iowa, the veteran Joni Ernst defeated Bruce Braley to give the Republicans the six pickups they needed to flip the Senate to their control.

In a race that had polled very tightly, incumbent Sen. Pat Roberts (R) opened up a 7 percent lead over Independent candidate Greg Orman with 67 percent of the votes counted.

Roberts, 78, has been in the Senate for almost two decades and has his eye on staying in the game for another six years. Orman, comparably young and spry at age 45, has taken his status as an Independent a bit too far for the public on some issues. For example, he can’t seem to tell voters if he will caucus with Democrats or Republicans if he is elected.

In Georgia, David Perdue opened up a 13 percent lead over Democrat Michelle Nunn, with 94 percent of the vote counted.

Republicans have the possibility for other pickups in Louisiana, North Carolina, and Alaska.

Republican Rep. Bill Cassidy forced Sen. Mary Landrieu into a Dec. 6 runoff in Louisiana. The Republicans needed to gain six seats in all to end a Democratic majority in place since 2006.

In Alaska, Republican Dan Sullivan is considered to have a good chance of winning.

Several Senate races were close, a list that—surprisingly—included Virginia. With over 98 percent of the votes recorded, the Democrat Warner holds a 9,000 vote lead. A recount seems likely.

There was better news for Democrats in New Hampshire, where Sen. Jeanne Shaheen was re-elected.

Obama was at the White House as voters remade Congress for the final two years of his tenure. With lawmakers set to convene next week for a postelection session, he invited the leadership to a meeting on Friday.

At a campaign event last week in Wisconsin, Obama told the Democratic crowd that Republicans are patriots. “Listen, I want to say this. Republicans are patriots, too. They love their families. They want what’s best for the country. But … there are a lot of people in my family who I really love, but I wouldn’t put them in charge. Because they got bad ideas. Right? So I’m not saying there’s anything wrong with the Republican leadership as sort of like—as Americans. I’m just saying they’ve got bad ideas.”

It looks as if the president will be working with those ideas for the rest of his two years in office.

No matter which party emerged with control of the Senate, a new chapter in divided government was inevitable in a nation marked by profound unease over the future and dissatisfaction with its political leaders.

There were 36 gubernatorial elections on the ballot, and several incumbents struggled against challengers. Tom Wolf captured the Pennsylvania statehouse for the Democrats, defeating Republican Gov. Tom Corbett. Obama had campaigned for him on Nov. 2, firing up those present to chant “Vote! Vote! Vote!

Also winning a new term was Ohio Gov. John Kasich, one of several presidential candidates on the ballot across several states.

In a footnote to one of the year’s biggest political surprises, college professor Dave Brat was elected to the House from Virginia, several months after he defeated Majority Leader Eric Cantor in a Republican primary.

Republican Gov. Rick Scott held a narrow lead over Democratic challenger Charlie Crist in Florida. With 55 percent of the vote counted, Gov. Scott Walker of Wisconsin had opened a 11 point lead over his rival, Mary Burke.

Speaker John Boehner of Ohio had little opposition in coasting to a 13th term and is likely to retain his top leadership post.

Not even Democrats claimed they had a chance to topple the Republican House majority. They spent the campaign’s final days dispatching money to districts where incumbents suddenly found themselves in danger.

Republicans sought to downplay any expectation of large gains. A pickup of 13 would give them more seats in the House than at any time since 1946.

The elections’ $4 billion price tag spending was unprecedented for a non-presidential year.

The shift in control of the Senate will likely result in a strong GOP assault on deficits, additional pressure to accept sweeping changes to the health care law that stands as Obama’s signal domestic accomplishment and a bid to reduce federal regulations.

There were 36 Senate races on the ballot, although most of the attention went to fewer than a dozen. They drew hundreds of millions of dollars in attack ads in a campaign season estimated to cost more than $4 billion—just for the races for Congress.

Federal monitors from the U.S. Department of Justice (DOJ) have been busy throughout voting day keeping an eye on 28 jurisdictions in 18 states. The DOJ sent elections monitors to watch “numerous aspects of local election procedures,” according to a statement from U.S. Attorney General Eric Holder.

Lawyers and staff of the DOJ’s Civil Rights Voting Section in Washington, D.C. have also been taking calls and fielding election-related complaints over possible voting violations. The DOJ is responsible for enforcing a number of voting-related statutes that help to ensure fair elections for voters and candidates, including the Voting Rights Act, the National Voter Registration Act, the Uniformed and Overseas Citizens Absentee Voting Act and the Help America Vote Act.

The NAACP noted on its official Twitter feed that they are hearing reports from ThinkProgress that voters in some parts of Missouri are being asked for ID before they can vote. Missouri does not require that voters show photo identification in order to cast a ballot. The NAACP said that voters in Ferguson and Jennings were asked for two forms of ID if they don’t have photo ID.