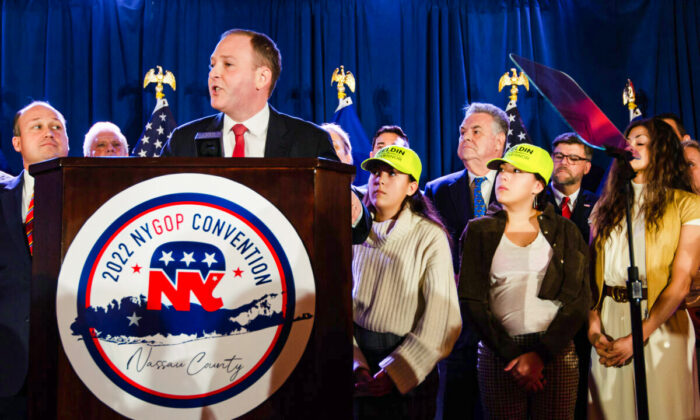 Rep. Lee Zeldin (R-N.Y.) and Andrew Giuliani, both Republican candidates for governor, called for a return of capital punishment in New York, while Gov. Kathy Hochul, a Democrat, called for more scrutiny on social media platforms.

Zeldin suggested reactivating the death penalty in some circumstances.

“New York must bring back the death penalty! I’m calling on [Gov. Kathy] Hochul to act. We won’t let this go. Killing police officers and first responders, fatal hate crimes like yesterday’s attack in Buffalo, homicides with multiple victims, and many other crimes should be eligible for the death penalty,” he wrote in a May 15 statement.

“In some of these cases, the only fitting form of justice is the death penalty.”

At least 10 people died after a suspect opened fire, hitting 13 people in a mass shooting at a supermarket in Buffalo on May 14.

Payton Gendron, 18, was identified as the suspect and has been charged with first-degree murder, which carries a maximum penalty of life in prison without parole in New York.

Officials said he was detained for a mental health check last year after making a school shooting threat. He wasn’t charged criminally in that event.

“In New York, Capital Punishment has not been an option for decades. If Gendron is convicted, I believe the Death Penalty should be on the table and as Governor, I will push to make sure that is an option for mass murderers and cop killers!” he wrote in a social media post.

However, Hochul, who’s running in this year’s election to try to remain governor, is more interested in scrutinizing social media platforms and targeting white supremacy.

“The CEOs of those companies need to be held accountable and assure all of us that they’re taking every step humanly possible to be able to monitor this information. How these depraved ideas are fermenting on social media, it’s spreading like a virus now. The white supremacy manifestos, the white supremacy concept of replacement theory, where they’re concerned and now taking to the streets in places like Charlottesville and others, motivated by this idea that immigrants and Jews and blacks are going to replace whites, and that is spreading through social media platforms that need to be monitored and shut down the second these words are espoused out there in these platforms,” she said on ABC’s “This Week.”

Hochul was former Gov. Andrew Cuomo’s lieutenant governor and replaced Cuomo after the latter resigned amid allegations that he sexually harassed 11 women.