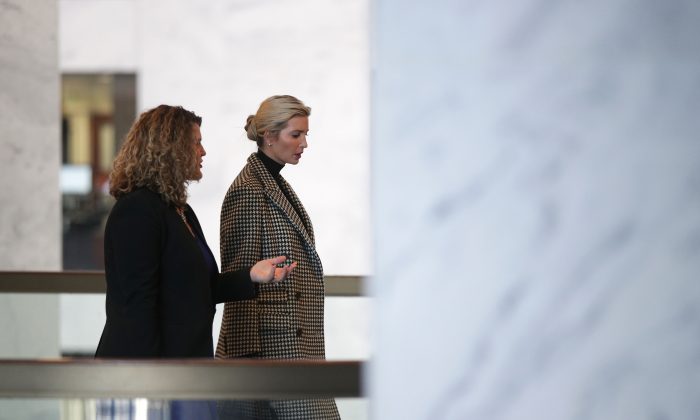 Republicans are now planning to introduce a slew of proposals on paid family leave in the coming weeks, representing a new shift for the Republican Party after President Donald Trump’s recent push to empower working parents—a topic previously dominated by Democrats.

In his State of the Union address, Trump vowed to implement a nationwide paid family leave plan “so that every new parent has the chance to bond with their newborn child.” He said he was “proud” to be the first president to include such a proposal in a budget.

Following the president’s lead, Sen. Mike Lee (R-Utah) will introduce a paid family leave plan “next week,” a spokesperson for the senator confirmed with The Epoch Times.

Other Republican lawmakers working on similar legislation include Sen. Joni Ernst (R-Iowa), Bill Cassidy (R-La.), and Rep. Ann Wagner (R-Mo.), Roll Call confirmed. The batch of upcoming bills is expected to be the first wave of paid-leave proposals from Republicans in the runup to 2020.

One key advocate of paid family leave is Ivanka Trump, the daughter of and a senior adviser to the president. Since she stood with her father during a 2016 rally in Pennsylvania, where he discussed a six-week paid leave proposal, she has met several times with members of both the House and Senate to push for paid family leave.

“Our priority is to expand freedom & flexibility & give new parents the option of paid parental leave so they can spend more time w/their children during the most precious & formative time of a child’s life,” Wagner wrote on Twitter.

Productive meeting w/@IvankaTrump to discuss our Paid Parental Leave bill. Our priority is to expand freedom & flexibility & give new parents the option of paid parental leave so they can spend more time w/their children during the most precious & formative time of a child’s life pic.twitter.com/5YyyNijbui

In December 2017, President Trump signed the Tax Cuts and Jobs Act (TCJA), which included a new tax credit of up to 25 percent to businesses that offer paid family leave to their employees. The White House said the tax credit marked an important step in promoting paid family leave nationwide.

Aside from the tax-credit benefits, the Trump administration argued that paid family leave is an investment in America’s future that will strengthen the family bond and improve financial stability—values that Republicans have long held. The administration also linked the paid leave proposal to its pro-life policies. Trump recently signed a letter to Congress making clear that he will veto any legislation that weakens protections for the unborn.

Polls have shown that paid leave is popular among U.S. voters from both political parties. A 2018 poll from the Cato Institute found 88 percent of Democrats, 71 percent of independents, and 60 percent of Republicans support a government program to provide 12 weeks of paid family leave. The support from Republicans is spearheaded by its women, with 72 percent saying they would support such a proposal, compared to 50 percent of Republican men.