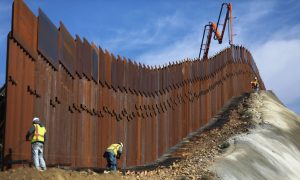 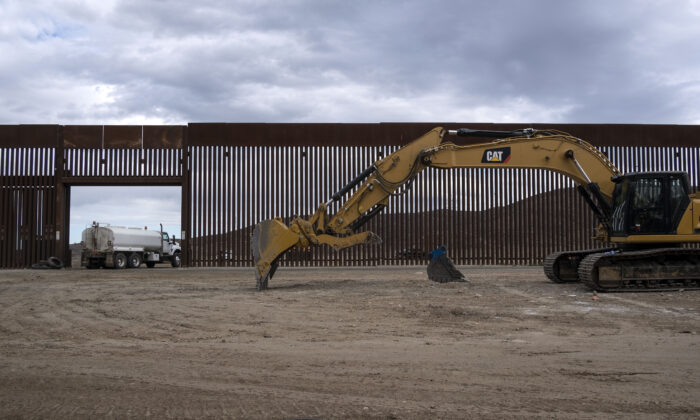 A caterpillar parks between fences at a reinforced section of the U.S.–Mexico border fencing in eastern Tijuana, Baja California state, Mexico, on Jan. 20, 2021. (Guillermo Arias/AFP via Getty Images)
Republicans

House Republicans are urging the Government Accountability Office (GAO) to issue their assessment of President Joe Biden’s decision to halt funds appropriated by the 116th Congress for the construction of the southern border barrier, as being either legal or illegal under current laws.

In their most recent attempt to get answers about the legality of Biden’s border wall funding freeze, Republicans sent a letter (pdf) on Tuesday to GAO Comptroller General Gene Dodaro, requesting an update on the status of that investigation.

“In GAO’s testimony, they claimed to have begun looking into President Biden’s decision to freeze funding for the border wall back in January, which means a report and findings are now long overdue,” wrote House Budget Committee Republican Leader Jason Smith (R-Mo.). “The continued delay only enables the Biden Administration’s failed policies that have created a national security and humanitarian crisis along the southern border.”

The GAO previously told Smith’s committee in a hearing on April 29 that the office was expecting to receive the legal opinion of the Office of Management and Budget (OMB) and the Department of Homeland Security within a week.

“This deadline has passed and therefore, we are requesting a status update on GAO’s investigation,” Smith wrote.

Immediately after taking office on Jan. 20, Biden issued a proclamation titled, On the Termination Of Emergency With Respect To The Southern Border Of The United States And Redirection Of Funds Diverted To Border Wall Construction, which ordered that construction of the remaining border wall be stopped indefinitely.

GAO deputy general counsel Edda Emmanuelli Perez told the panel in April her agency started looking into the legality of Biden’s freeze on border wall funding as early as January when the White House first announced the directive. “We did actually begin looking at this issue, when the president announced this in January,” Perez told the committee.

Republican senators previously pressed the GAO on its evaluation of Biden’s decision.

Sen. Shelley Moore Capito (R-W.Va.) on March 17 led 40 Republican senators to send a letter asking the office to evaluate whether it was justified under federal law. House Republicans later joined, with over 70 GOP members signing on to Moore Capito’s letter.

In Tuesday’s letter, Republicans said they are “deeply disturbed” that they have not received any answers from the GAO about the report that was supposed to have been issued.

“What makes this situation especially concerning is the fact that GAO issued a legal opinion on a similar incident within approximately two months after receiving a request from Congress in 2019. Considering that more than 100 Members of Congress requested a legal opinion from GAO in March 2021, this suggests that GAO is capable of issuing an opinion within a similar timeframe,” the letter stated.

Mark R. Paoletta, a senior fellow at the Center for Renewing America and general counsel of OMB under the Trump administration, told the House Budget Committee that Biden’s withholding of funds for the border barrier construction is illegal.

“President Biden is holding, that his impounding funds for the construction of a wall along the southern border, including $1.4 billion, specifically appropriated for the border wall construction,” said Paoletta during the April 29 Budget Committee hearing. “Based on GAO’s opinion on funding for Ukraine, President Biden’s hold is clearly illegal and a violation of the Impoundment Control Act (ICA), but the Democrats on this committee have been silent on this direct assault on Congress’s power the purse,” Paoletta continued.

ICA or its full title, The Congressional Budget and Impoundment Control Act of 1974, solidified Congress’s power of the purse. Title X of the Act “Impoundment Control” “established procedures to prevent the President and other government officials from unilaterally substituting their own funding decisions for those of the Congress.” The measure also created the House and Senate Budget Committees and the Congressional Budget Office.